Whale-watching trips are massively popular today – many former whaling communities have taken on board conservationists’ arguments and switched to whale tourism as a viable source of income. And now, with tracking methods becoming so sophisticated, any boat that sets off to find a pod of whales can be reasonably sure that it will meet with success. Whales of all types are prolific off the coasts of North America and Canada. In fact in some places such as Glacier Bay in Alaska, if you’re lucky you might see humpbacks, minkes, even blue whales, the largest animal known to have ever lived. Here is where to go if you fancy getting your whale-watch on… 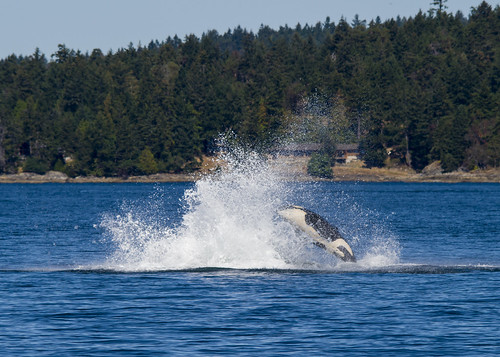 There are seven populations of Beluga whale in Canada, and the one found off Hudson Bay near Quebec is classed as endangered. That means, if you do want to see them, you really need to join an organised expedition, and make sure it’s with a reputable company that prioritises the whales’ needs over profits or good photo opportunities. Belugas are very curious animals, so you can expect to see quite a lot of them on a good day. They’re totally white, and swim slowly, so that should make it a bit easier too.

Glacier Bay should be on the itinerary of anyone visiting Alaska. Not only will you be astounded by the gigantic floating blocks of glittering ice on the horizon, but if you’re there between June and August then you stand a good chance of encountering blue whales. Weighing up to 190 tonnes(!), as well as being the largest animal ever to have existed, they’re also the loudest – their subsonic calls, which often seem to take the form of simple songs, were once thought to minor earthquakes when first recorded.

No excuse should ever be needed to visit gorgeous Cape Cod of course, but if it were, catching a glimpse of humpback whales breaching the waves must be a good one. Whilst also endangered, there are still many to be seen off the coast, and like the Blue whale, they are also very good singers – in fact their songs often last up to 20 minutes – entrancing when you hear it over the boat’s speakers. You can also see humpbacks frequently off the coasts of Hawaii and California.

It’s rare to see a narwhal, they rarely break the surface of the water. But if you do happen to catch one, usually between May and August off Baffin Island in Canada, you won’t forget it in a hurry. They have an unmistakable pointy tusk on the front of their heads, which were once sold as unicorn horns. Narwhals are hunted for their flesh by the native Inuit population which may partly explain their shyness. When they dive down to feed, they can be underwater for up to 25 minutes, so plenty of time to put a new memory stick in the camera.

Instantly recognisable, the orca, or killer whale, is often found in the Pacific waters from March to November. Highly sociable animals, you’ll often see them in large groupings. Although they have the nickname “killer”, no human has ever been officially reported as killed by a wild orca. You’re in more danger of seasickness than coming under attack, as they prefer to prey on the young of other whales. Grand American Adventures and other tour companies visit Vancouver, and you can easily arrange an orca-watching trip through their agents.

5 Tips For Romantic Weekend In Rome!