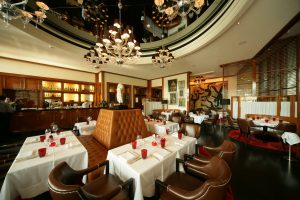 In most cities of the world you will find different colored counters, kiosks of street food not only for its attractive appearance and flavor, but also provide a national symbol.

On the crowded streets of international city there are food stalls with sweet soup tofu or snakes, egg pies and dumplings. Best places to see the diversity of Hong Kong street food are markets Tempel Street in Yau Ma-TEI, Women bazaar street Choi-Tang and Kowloon City. You can try hot pot, curry fish balls and tofu kebabs. Number of “dei Pei-Dong” – as they call street food vendors – reduced from 1980s, but the famous Noodle-shops – shops of many varieties of noodles and markets still thrive.

Street food counters occupy a central place in Rio. Street vendors offer a wide range of snacks and prepared foods, including fish, potato croquettes, feyzhoadu (rice with beans and pork) and a variety of salty pretzels. Also in Rio worth to try drinks, particularly popular acai berry juice. It is also very tapioca pancakes and churros with chocolate or caramel filling. In the Old Rio’s most popular street foods include barbecue (in Portuguese churrasquinhos), hot dogs (they are called cachorro quente) and cheese bread (pao de queijo).

Although Paris is associated mainly with decadent leisurely dinners in posh restaurants, but city streets are also very interesting in gastronomic terms. In particular, it is very tempting to tourists is legendary thin French pancakes crêpe – the main element of the food street vendors in Paris. Do not forget about the famous French pastries. In numerous Parisian bakeries you can always buy fresh sandwiches and baguettes. The streets in the Marais should are known for popular Arabic cuisine dish falafel and Indian samsa.

Recently in Boston and some other cities in the United States Portable groceries rapidly gain popularity. About 50 boxes of various food plying the city, stopping to trade in one of the 30 allocated seats. The range of dishes such mobile catering is quite wide. For example, there are vans with Vietnamese cuisine and vans that specialize in cooking  lobster rolls. Chefs of such mobile eateries suit gastronomic festivals and culinary events, and sometimes even open own stationary restaurants. In addition, many restaurants in Boston started practicing selling their food on the streets.

Streets of Istanbul filled with food stalls and occasional sellers. National Turkish cuisine is the most popular and you can try on the streets of Istanbul: Kebab (small kebabs of lamb, beef or chicken on wooden skewers), doner (meat roasted on a vertical spit) lahmadzhun (Turkish pizza), cakes with sesame and various products made of puff pastry. A lot of street food vendors in the areas of Karakoy, Taksim and Ortakoy. On the waterfront for three Turkish lira you can buy a sandwich from fish sellers in one of the boats moored there.  Counters with roasted corn and chestnuts are also culinary raisins of Istanbul.

Author Bio: Arina Valishinskaya is a charming Ukrainian girl who lives her country and writes about Ukraine vacation.

Traveling with Children? Here Are Some Simple Tips for You

Off The Beaten Path Tourist Destinations

Soak Up History and Wine In Trier