Zombies have captivated audiences since George A. Romero’s Night of the Living Dead first terrified drive-in theatres and late night cinemagoers in 1968, and they have found their way into the public consciousness by rampaging their way through every genre of film and every form of entertainment, from comedy to horror, film to TV, graphic novels to organised events such as the now-infamous zombie walks, when fans of the genre dress up as zombies and walk through a particular city.

With The Walking Dead currently in its fourth season and showing no signs of slowing down, zombies have never been hotter. In fact, if you ask most film fans which fictional movie world they would like to live in, a zombie apocalypse would be high on that list, such is the lasting and wide-ranging appeal of the shuffling ghoul. 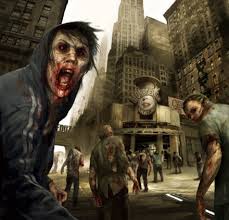 As a film geek myself, I have had many conversations about how people could survive a zombie infested world. Could you ever be prepared for such an occurrence? My answer has always been: Yes. Here are five types of property that could withstand the zombie apocalypse. Just in case….

In every zombie film ever made, the walking dead are usually found shuffling around big cities in their droves, and these cities are the last place you would want to be. Too many people and too many high-rise buildings.

With a beachfront home, you could set up a nice zombie-free zone and top-up your tan at the same time, and there are some fantastic locations on the coast of America and Australia that would be great to see out the apocalypse. But how would you protect your home from a zombie invasion? Beach homes are often elevated, and if you have cargo lifts installed, you can get supplies to and from your home without too much of a problem. Zombies can sit and moan at you all they like, but they won’t be coming up to your home, leaving you to enjoy your ocean view without worrying about being eaten alive.

Remember Bill Murray’s hilarious cameo in Zombieland? The guys in that movie hit on a great way to survive the zombie apocalypse: Head to a celebrity home or mansion. Think about it: Celebrities have annoying fans looking for autographs and a hugely inflated ego, so their homes will be filled with gadgets and protected like a fortress. With CCTV, alarms, panic rooms and heavy doors and front gates, you can rest assured that a Hollywood celebrity’s home is the place to be when the walking dead come a-calling.

Just remember: The bigger the celebrity, the better the home. Look for Adam Sandler’s house rather than a reality TV stars house, and always make sure you search the house before you set up your zombie survival home to make sure there will be no nasty surprises once you feel comfortable and safe.

Missile silos and homes built by governments and billionaires in the wake of Cold War paranoia could be a zombie-free haven for you and your fellow survivors. Even if you get a little claustrophobic and aren’t keen on living underground, some of these locations have been kitted out to the nines and look more like the celebrity mansions mentioned previously than a gritty bunker built to withstand a nuclear attack.

The greatest advantage of these kind of government-built silos is that they are built for long-term survival, including protection against power grid breakdown, fires and drought. The zombies outside will soon become a distant memory as you adjust to living life below the ground.

For some other fantastic ideas for zombie-free homes, click here.

Good luck in your bid to survive the zombie apocalypse. Just remember, wherever you go and whatever you decide to do, always remember to keep food, hygiene products and water supplies stocked up as best you can, and don’t go anywhere alone…

Beginner’s Guide To Compose A Song

5 Fun And Exciting Things To Add To Your Bucket List