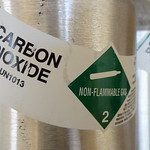 One of the major environmental causes undertaken by researchers is the issue of the increased concentration of carbon dioxide (CO?) in the air.

CO? is one of the main greenhouse gases, and a leading instigator in global warming.

The high levels of CO? are largely as a result of burning fossil fuels such as coal and petrol.

An interesting technological development could ironically see a fuel, rather than simply emitting CO2,

actually pulling CO? out of the air while being manufactured.

The application of nanotube technology in the energy industry has been known for some time now.

A nanotube is a cylinder made up of atomic particles with whose diameter is a few billionths of a metre (or nanometres).

They’re stronger than steel, but more flexible than plastic.

They have a variety of uses because they exhibit excellent thermal and electrical conductivity.

Scientists have used titanium oxide nanotubes, together with sunlight, to transform CO? back into methane,

the main ingredient in natural gas. This can be used as fuel that burns cleaner than other fossil fuels, such as petroleum or coal.

So, on one hand, this could reduce the quantity of CO? in the atmosphere, and on the other hand, provide an alternative, cleaner fuel.

Working on this project is Craig Grimes of Pennsylvania State University, who says, “Right now there is lots of talk about burying carbon dioxide, which is ridiculous.

Instead we can collect the waste out of the smoke stack, put it though a converter, and presto, use sunlight to change [CO?] back into fuel.”

How it actually works

The chemical conversion of water and carbon dioxide to methane is easy enough to understand:

The team of researchers accomplish this by making an arrangement of titanium oxide nanotubes vertically in the shape of a honeycomb,

which is then covered with a thin layer of copper oxide.

The released carbon and hydrogen combine to form burnable methane, with oxygen as a by-product.

A new kind of solar power?

Sunlight seems to be the way to go.

Using outdoor, visible light, they reported a yield of methane that was 20 times higher than previous attempts conducted in laboratory conditions using intense ultraviolet exposures instead.

Craig Grimes calculates that focusing the light collected from 1,100 square feet onto one of these nanotube membranes could produce over 132 gallons of methane on a sunny day.

Grimes thinks of this process as being analogous to solar power, because essentially energy is being generated via sunlight.

Instead of storing electrons in batteries, energy is stored chemically.

This makes for a clean and sustainable energy source, as the main ingredients are sunlight and water.

So let’s hope that this technology becomes commercially used in the near-future.

Queenie Bates is an avid reader and writer, especially in the field of sustainable energy.

She tries to stay up to date on new technologies by attending gas events and oil conferences, and reading up on as much as she can.

A Water Filter System Is Too Hard To Install. Eagle Water Treatment Systems Explains That It’s The Opposite

Keep Your Yard Looking Fabulous: 5 Ways To Maintain Your Yard