To live life in accordance with the ‘old rules were to be broken’ mantra is to eventually find yourself in a whole heap of trouble.  Indeed, all rules were most certainly not made to be broken, though in the world of fashion at least, there are plenty of silly and dated rules that could really do with being ousted entirely.

Unsurprisingly, this is something that applies even more to those categorised in a variety of brackets which again would be more beneficial if they disappeared entirely. One perfect example being the ‘plus size’ category, which in many respects is largely nonsensical considering the fact that plus size is in fact the average size, so why does it have to carry a label at all?

But digressing from that particular hot potato for a moment, plus size clothing is inevitably a subject bound by a thousand and one rules with regard to what millions of women should apparently be doing and very much not doing. Of course, certain rules it would be inadvisable to argue with as they make the total sense to say the least…deliberately donning clothing that’s far too small for you just to make a statement being one of them. At the same time, though, so many longstanding rules still followed to the letter by so many plus size women are to a large extent steering the masses in entirely the wrong direction. 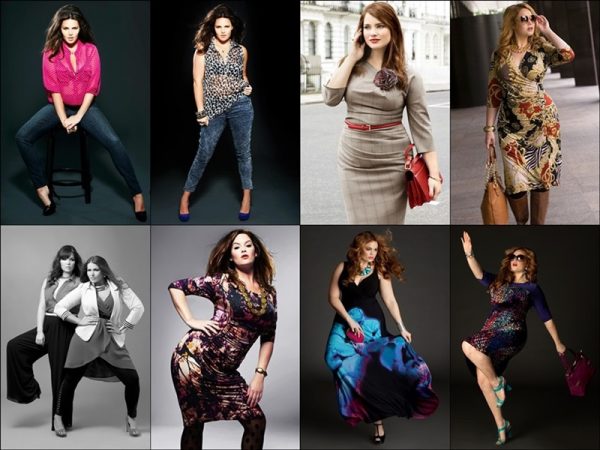 So just to illustrate the point and hopefully motivate additional thought prior to following the rules so blindly in the future, here’s a quick rundown of six silly fashion rules the plus size crowd should begin breaking right now:

1 – Stay Away from Peplums

This is something of an unwritten rule that tends to be one that is interpreted as a simple common sense, or at least obvious by most curvy women. The general consensus being that peplums do little other than add volume and size in areas where additional perceived volume and size are not exactly welcome. In reality, however, it isn’t always the case at all as when peplums are fully combined with formfitting bottoms, they can be used to both emphasise dreamy curves and create the illusion of a more slender shape. You have to be careful of course, but it’s a rule you can very much break.

Once again, you can sort of see where the logic applies to this one as it has always been at least assumed that larger prints add to the perceived size and volume, while smaller prints have the opposite effect. The thing is though, it technically isn’t true in the slightest as not only does it greatly depend on both the type of print and the garments in question, but suitability is determined almost entirely by the fit of the garment. As such, to write off large prints altogether is entirely nonsensical as the right garments with the right fit can and will look spectacular.

3 – Two-Piece Bikinis Are Not Your Friend

Absolute complete and utter rubbish – it really is as simple as that!  This is the kind of rule dreamed up and perpetuated by those who seem to have forgotten the fact that being curvy doesn’t necessarily mean you are in fact a 75-stone behemoth.  Contrary to popular belief, plus size women can boast just as flat, toned and fabulous mid-sections as anyone else – so if you’ve got it, flaunt it!

And it’s exactly the same story with crop tops, which may not necessarily look particularly appealing if you’re losing the fight against a flabby belly, but can look genuinely outstanding for those with more toned midriffs.

5 – Always Cover up Your Arms

A rule that’s as outdated as it is annoying…and that’s VERY to say the least!  Once again, the debate as to whether to rock bear arms or keep them covered is all totally circumstantial and relative – it depends on what you plan to wear, what you plan to wear it with and where you plan to wear it. To be frank, it all comes down to comfort and confidence, so if you’re happy and comfortable having your arms out in the open, go for it!

Last but not least, is it true to say that wearing black will almost always help create the illusion of a slender frame? Technically speaking it is, but at the same time this doesn’t mean that block black clothing represents the only option when it comes to looking leaner. At least consider throwing in a pop of colour here and there as while black will pull it off to a certain extent, its overall effects and appeal are both enormously overrated.