Many experts have taken note of the fact that severe weather events are occurring more frequently throughout the world. Regardless of whether a person believes this is related to global warming or not, the fact remains that treacherous weather systems are affecting more and more people. While most people hunker down for these events, many people forget the fact that citizens often still have to drive in these storms. Because of this, it’s imperative for people to understand how to stay safe when serious weather patterns make the streets precarious.

Most experts agree that severe weather events are increasing across the world. While some people may want to contest this, simply looking at the most serious weather events in recent history supports the fact.

It’s important to note that some areas in America are more prone to severe weather. Spring in Chicago, for instance, brings with it a yearly collision of cold and warm air that spawn anything from severe thunderstorms to the over 10 inches of snowfall that occurred in April 1970.

Sadly, these climatic events are detrimental for those on the roads. Statistics show that 24 percent of all auto crashes are related to weather, and nearly one in every five auto deaths occurs due to severe weather patterns.

There are a variety of ways that drivers can stay safe on the roads during severe weather. When severe storms have left the roads soaked, for instance, which accounts for most weather related crashes, drivers should decrease their speeds, especially around curves, and apply brakes slowly to prevent skidding. Additionally, it never hurts to use one’s emergency blinkers when rain is making it difficult to see.

When it comes to snow, drivers should remain in a lower gear and apply their brakes gently when necessary. Cruise control should never be used during these conditions and it’s important to clean headlights and the windshield before heading out.

When it comes to extreme windy conditions, which can also occur during rain or snowstorms, keeping away from buses, semi-trucks and other large vehicles is essential since they can easily be moved around by heavy winds. 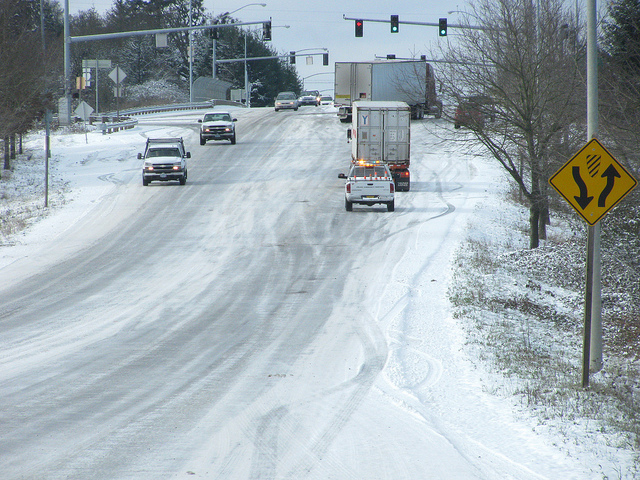 Before heading out in dangerous weather, stash a first-aid kit and other survival gear such as flashlights, snack bars, water, and medical gauze in the vehicle. Make sure your cellphone is fully charged as well. And here’s one more amusing but helpful hint: buy and stash kitty litter in the trunk. Why? Because kitty litter can improve tire traction if you’re stuck on a snowy, icy, or slippery road.

After an accident, it’s important to try to get off of the road if possible. Due to low visibility in some weather conditions, remaining stalled on the roadway can prove deadly. It’s important to immediately call for emergency help. Use flares, or a brightly colored fabric perched through a cracked window to alert others of your location and to solicit their help.

Ask any Chicago driver and they’ll tell you “Never trust the weather!” This proves true every day in the Windy City, but the fact is that, just because an accident was caused by extreme weather, it doesn’t mean that someone wasn’t at fault.

A negligent driver who doesn’t practice safe driving habits in dangerous weather is just as liable for a collision that they cause as anyone else. In these cases, Illinois residents know that it’s important to seek out a skilled Chicago auto accident lawyer.

The other driver will likely try to make it seem as if the accident wasn’t their fault, but that attorney will know how to prove negligent behavior involving extreme weather.

The world doesn’t stop for the weather and neither can we. There are some weather systems that are so ferocious that government offices and companies will shut down, but this is a rare occurrence. The best plan during severe weather is to stay off of the roads, but when travel is absolutely essential remember these tips and stay safe.

Writer LaGeris Underwood Bell hopes we all brave the coming winter storms in safety. For those Windy City denizens unfortunate enough to be in a car accident during this season, she suggests contacting a Chicago auto accident lawyer for legal advice.

4 Humane Ways To Rid Your House Of Unwanted Pests