At the time of the publication of this article Toronto was undergoing a dramatic reawakening in the restaurant industry with more than a thousand new eateries opening during the previous year alone. An international city known best for banks and brokerage firms, Toronto’s latest and most innovative chefs has transformed the city into a bona fide haven for gastronomes. Here, we hope to provide a satisfying account of the twenty most notable and festive restaurants in Toronto. 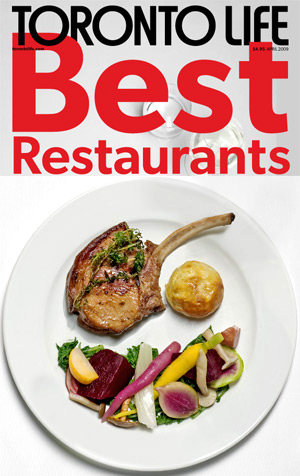 Near the top of everyone’s list of top-of-the-palate Italian restaurants is Buca whose house-made pasta is heaven on earth.

The Grill at Scaramouche

A neighborhood hot spot with an enthusiastic clientele, Scaramouche sports an authentic and casual ‘uptown’ ambiance.

The chefs of the latest addition to Koreatown strive to focus on that which is fresh and in season. Famous for clam soup, scallops and mushrooms.

Purported to be the new go-to place for authentic Chinese dishes along with 5-star hotel service, the Grand Chinese Cuisine radiates.

Noisy and chaotic, there is probably no more sublime place for late night Chinese in the ‘burbs than Congee Wong.

This Mexican cantina derives its inspiration from a variety of regions in Mexico. Milagro features dishes (fried plantains) found nowhere elsewhere in Toronto.

A bit of deliciousness from the sub-continent comes in the form of kebabs, muttar, paneer and even a few Pakistani treats in this small Indian restaurant.

Recipes for the signature dishes in this Koreatown eatery come from the Malabar region of India. Maroli is known for its fish vattichathu and Malabar chicken.

Acadia
One of the very few places in the civilized world where one can get a respectable Pimm’s Cup cocktail or a Sloe Gin Fizz is the venerable Acadia.

A disarmingly amiable place — perfect for that candlelit dinner with a special someone, Edulis harkens back to an old-school era of hospitality.

This Maritime-themed restaurant features snow crab and oysters, and has put regional Canadian cooking squarely on the map.

This is a great spot for those who love to share. The menu features little and big crow plates of sides and desserts.

Cava is regarded as one of the city’s “hidden gems” by the locals owing to the fact that it remains hidden among the flora and fauna of Deer Park plaza.

Situated in the heart of the Financial District, the charming atmosphere within this establishment is always calm and relaxing even when the house if full.

Morton’s is part of a classic steakhouse chain. On its menu is exactly what one would expect when craving steaks, chops and mashed potatoes.

Mogette is a charming 29-seat French bistro nestled within a clutch of boutiques and antique shops near Eglinton and Davisville in the City.

Enroll Yourself On The Best Cupcake Making Courses