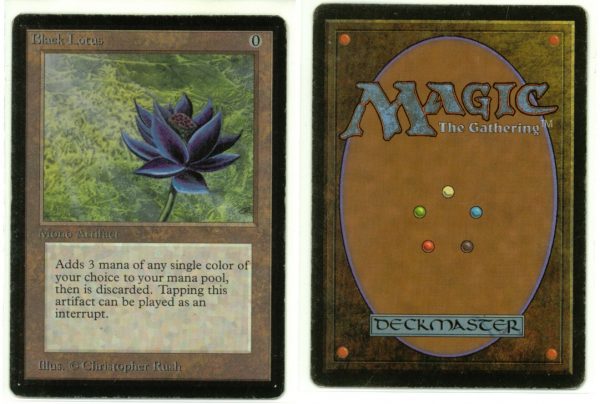 Black Lotus was only offered in two scarcely produced sets, Alpha and Beta. The card is often considered the most coveted card in the history of Magic: The Gathering, with some often selling for thousands of dollars to eager collectors. Black Lotus also has the distinction of being the most expensive Magic: The Gathering card ever sold (a perfectly graded Black Lotus from the rarer of the two sets, Alpha). The Black Lotus allows you to add three manna of any color to your manna pool. It also has the rare distinction (for such a good card) of not having a casting cost.

Channel is considered the strongest, and most unique, early green era Magic: The Gathering card. This is significant since the early green cards are already considered very unique. Channel features some of the most distinctive artwork that truly epitomizes the early era of Magic: The Gathering. Though the card is not very valuable now, it remains one of the more unique vintage cards. This is due to its vintage feel and its unique and rare power, which allows you add one colorless manna to your manna pool for one life each until the end of your turn.

Many people consider Ancestral Recall to be the strongest Magic: The Gathering card ever produced. Ancestral Recall allows you to draw three cards, or to force your opponent to draw three cards, immediately. Part of what makes the card so unique is that, as the game evolved, this advantage became so unfair that Ancestral Recall became banned in all tournament play except for vintage, where it is heavily restricted. No card in the history of Magic: The Gathering better exemplifies the growth of this amazing game than this wildly unique, rare, and expensive card.

The Rest of the Power Nine

A group of nine specific vintage cards, led by the aforementioned Black Lotus and Ancestral Recall, is considered the Power Nine. All nine of these cards (including Time Walk, Mox Sapphire, Mox Jet, Mox Ruby, Mox Emerald, Mox Pearl, and Timetwister) followed in the footsteps of Ancestral Recall and have been banned in tournament play, except for vintage, where they are restricted. While the other seven are not as unique as Black Lotus and Ancestral Recall, they are still some of the most unique, vintage Magic: The Gathering cards ever.

Gordon Keith, a freelance writer based in Nashville, Tennessee, has a longstanding interest in MTG cards, and strongly recommends that those looking to improve their collection visit Card Kingdom Magic Singles.