Play your cards right and a corporate event magician can be the kind of entertainer that transforms a bog-standard business event into a wholly unforgettable outing for all in attendance.

Business events in general tend to walk that very fine line between tolerable and unbearable – the addition of a cliché entertainer only ever standing to make things much worse. From low-rent singers to bands that can only play the same six songs on a loop and all the usual standards, it’s more common than not for the subject of corporate entertainment to prompt little more than a despairing cringe.

Magicians, however, are a different story altogether. No pun intended, but there’s something uniquely magical about the show a good magician puts on in the way in which it transcends all the usual barriers of taste, age and interests. Everyone loves a good magician and a good performance can be truly unforgettable – exactly why such shows can be pure gold for business events. 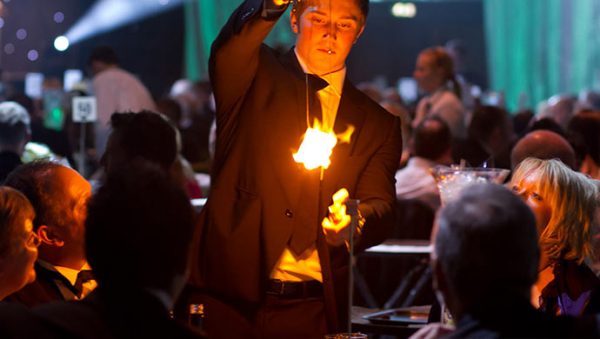 Of course the key lies in making sure you book the right magician in the first place and ensure the show put on is the right show for the event in question. Because of this, it’s important to ask yourself a few key questions before going ahead, including the following examples:

What Style of Magic Is Most Suitable For the Event?

Never overlook the fact that magic ranges from the ultra-cute and cuddly kiddy entertainment to that which has the potential to give a grown man nightmares for life. Suffice to say therefore, choosing at random for a business event is never a good idea as the last thing you want is to end up making a laughing stock of both yourself and your company in general. Think about who will be there, the kinds of things they may respond to and conduct your search accordingly. And if in any doubt, err on the side of caution rather than controversy.

How Long Should the Performance Be?

Something else to consider is the length of the performance, or whether you’d like the show to be split into two or more smaller shows throughout the event. Some corporate events benefit from a close-up magician who spends several hours mingling with guests and performing tricks up-close and personal for those in attendance. By contrast, some magicians are hired to take the stage and blast out a few tricks for 20 minutes before making their exit. It’s all up to you and the specifics of the event, so think carefully about all the options and decide how long you’d like the show to be.

Where Will the Performance Take Place?

One subject of critical important will be that of where exactly the performance will be taking place. For example, if you’ll be out in the open quite far from any buildings, chances are you’ll struggle if an electricity supply is needed. If the event is to take place in a relatively small tent, flame shows and pyrotechnics are out of the question. Think very carefully about where you will be and the kinds of shows that will be compatible with the location.

Will I Need Any Special Equipment?

Most magicians will of course bring along everything they need, but don’t take things for granted. The reason being that if the performer turns up and asks if you’ve set up the video screens and PA system you don’t have, it’s pretty much game-over from the start. The best advice is to never simply assume that the magician will have literally everything that’s needed across the board, instead ask them outright what you’ll need to make available. The last thing you want is for the show to be ruined and for it to be your fault.

How Can I Be Sure the Magician I Choose Isn’t a Dud?

During the selection process, be sure to look into the magician’s background, experience and reputation. Look for evidence of similar events in their past history, along with the feedback and recommendation of their past clients and customers. Things like images and video clips can also help ensure you make the right decision.

How Much Will I Have to Pay?

Last up, in terms of payment things will vary quite enormously depending on the quality of the magician, the nature of the show and how long they will be in attendance. Perhaps the most important thing of all to remember here is that if you’re only willing to pay pennies, chances are you’ll be in for a show you’ll end up wishing you never bothered with in the first place.

What to Expect From the History Channel Mini Series, The Bible

Thor – A Legend Across Many Genres

Why You Shouldn’t Trust Trailers Too Much?