Forty years ago the computer “disk drive” was a cabinet the size of a washing machine. It contained a stack of disks about two feet in diameter. This device would hold five megabytes. Yes, five MEGA bytes! Nowadays, you can carry a credit card sized device that will hold a half a terabyte—thousands of times the capacity of the “washing machine.” Change keeps happening and new ways of storing data are on their way. 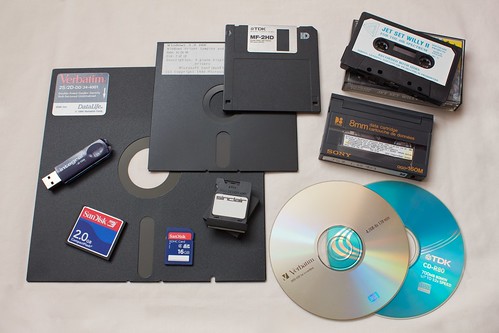 Hard disk drives (HDDs) are still the standard for data storage. They are a very mechanical device meaning they rely on spinning, hard platters on which a moving arm writes data in tracks. The evolution of HDDs has been by making the platters smaller, making them spin faster, and creating new algorithms for how the data is stored.

The current HDD technology allows us to store two terabytes on a drive that’s 15mm, or just over a half inch high. These z-height drives provide the means to reduce the weight in laptops and tablets. Drives that are only 7mm, or a quarter of an inch high, are becoming standard for mobile devices. Even thinner HDDs are planned to compete with the solid-stated disk (SSD) technology that is up and coming.

Your little flash drive (aka thumb drive) is an example of storage technology with no moving parts. It was only a matter of time that this solid-state disk (SDD) technology advanced to large commercial uses. Solid-state flash arrays use large numbers of flash drives to create the storage capacities needed by mid-sized to large businesses.

Flash arrays are faster and capacities are reaching into the dozens of terabytes. Many of today’s models are made to stack together to create even larger storage arrays. Much like the early HDDs, flash technology is still young, but with a lot of potential. Flash arrays can be large and require additional cooling. They may not interface as easily with other devices. And the software to manage these devices is still being refined.

One area where flash technology is beginning to compete with HDDs is in the laptop and tablet worlds. Some high-end devices are using flash storage now. Small size, high capacity flash storage is still expensive. As the price goes down, we’ll see more devices incorporating flash storage.

A transitional technology is also being used now, the HDD/SDD hybrid. This combines hard drives and flash drives in the same storage unit. These devices have a performance gain by writing data to the SDD first. Then the data is written to the HDD while the user is doing something else. Often-used data may be cached on the SSDs as well for faster access. Hybrids are more of a bridging technology and will likely not be a long-term solution as the HDD and SDD technologies both advance.

Bytes in the Cloud

It’s appropriate to mention the cloud as a way of storing data. When you store data in the cloud, you likely don’t know what technology the cloud vendor is using. More so, you may not care. You hit “Save” and off your data goes, presumably somewhere safe. It could be written to an HDD or SDD array and you wouldn’t know it. The significance in mentioning this is that there are already devices with limited storage that rely mostly on the cloud for its data storage needs.

Hard disk drives and solid state drives will continue to get smaller, faster and be able to hold more data. Research continues to be done on different ways to store data.

One technology uses heat instead of magnetic fields to store data on HDDs. It’s estimated that speeds could increase hundreds of times with this method. And for the science fiction lover, there is research being done on using DNA to store information!

Hardware and software has always pushed each other to advance. There’s no stopping it. That’s the amazing thing about technology. The cool, futuristic device you now use will likely be old news in just a few years!

Restore The Site Traffic: Fall Into The Steps Of Google Algorithms Updates

Apple Buys 3D Sensor Technology From PrimeSense For A Reason