Street food in India is an enticing, exciting and important part of the culinary culture. For visitors to the country, it is a chance to sample authentic, local bites at budget prices whilst those that call India home appreciate that street food vendors can play a vital role in food distribution throughout the cities.

Different parts of India tend to have their own favorite snacks and you can usually see this reflected in their street food choices. And surely there is not a better city to truly sample a diverse and delicious range of Indian street food than Delhi, the nation’s capital? 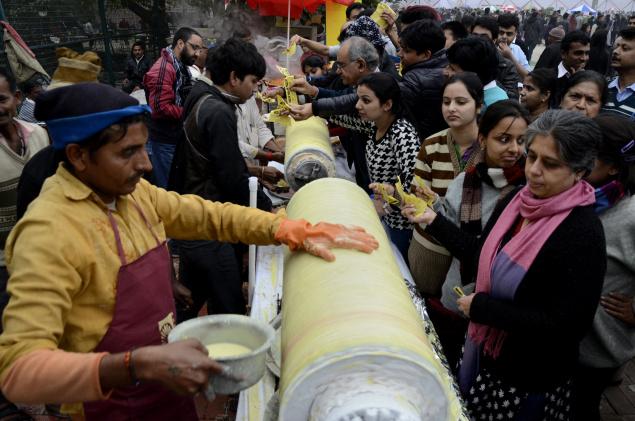 This December will see the fourth annual Delhi Street Food Festival take place at Jawaharlal Nehru Stadium complex. Last year, nearly 150 street food stalls from over 20 states congregated at the stadium to wow the crowds with a three day extravaganza of tasty treats, representing their signature dishes from their specific regions of India. This year, the festival is scheduled to begin on Christmas Day with over 200 vendors and is expected to attract thousands of foodies.

The festival is organised by the National Association for Street Vendors of India, an organisation that aims to help professionalize the street food sector, raising its profile and demonstrating that street food can be of top-notch quality. The organisation has also set up the company, Street Food Private Limited, in order to help vendors secure fresh, quality ingredients, become shareholders and ultimately make a real difference to the future of the trade and the lives of the people.

What Kind of Street Food could you Expect?

The short answer is: a little bit of everything. It certainly doesn’t sound as though anybody will be going home hungry. Experienced cooks from all over India, keen to showcase their specialties in the hope of taking home various prizes will ensure visitors are spoilt for choice. Regions represented include Rajasthan, Madhya Pradesh. Punjab, Bihar, Assam, Bengal, Tamil Nadu and Kerala, among others.

As well as interesting takes on familiar dishes such as the classic biryani, kebab and curry, regional favorites on display could include:

If India seems a little far off for December, why not get your fix of delicious street food at one of London’s best Indian brasseries? Book a table now to experience the authentic tastes of India.

Some Famous Recipes of Gujarati Cuisine

Time To Get More Details About The Cake’s Filling