BlackBerry has released Secure Work Space, an app suite that allows cross-platform interaction with the BlackBerry 10 Enterprise Service. With the wide variety of smartphones on the market across multiple operating systems, Secure Work Space is a major step in BlackBerry’s quest to retain their dominance of the business phone world.

While the last generation of smartphones has led to a move away from the convention of the ‘work Blackberry’ alongside one’s personal phone, Secure Work Space enables iOS and Android users to integrate their phones with their companies’ BlackBerry Enterprise Service. Users can securely view and edit work documents in the BlackBerry 10 office suite Documents to Go, as well as accessing integrated company email (including attachment viewing), calendar, and contacts, without having to use a VPN. The suite also includes a secure HTML5-compatible browser to access company intranet. 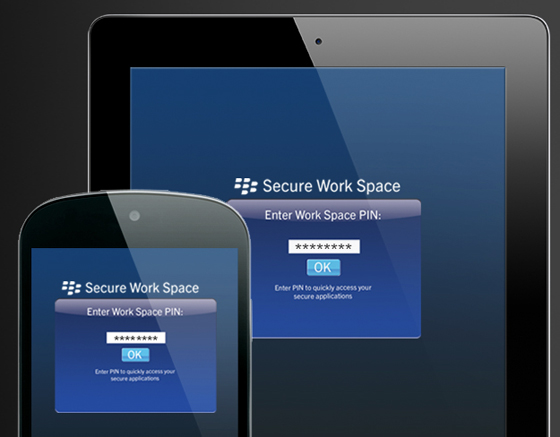 BlackBerry has ensured security at all levels from the device all the way up to the corporate servers, porting the firewalled connection technology to iOS and Android. AES 256-bit encryption, already used in BlackBerry 10’s Balance app (which allows users to split their BlackBerry device into a personal partition and a secure, separate work profile) provides users with absolute security, even over insecure Internet connections. The suite also includes app wrapping, providing security while using third party apps, which allows companies to benefit from a flexible hybrid approach to mobile computing. It has been confirmed that there will be support within SWS for Box, Harmon.ie, and Splashtop, presumably with more options to come.

As well being secure, Secure Work Space is also user-friendly, requiring no specialized development skills to use or integrate. IT staff are able to remotely manage employees’ Secure Work Space, and, in case of any problems, can wipe it without impacting at all on their personal data. Additionally, it will lock manually or when left inactive for a user- or company-defined period of time.

Secure Work Space is the successor to last year’s BlackBerry Mobile Fusion, a more basic mobile device management solution compatible with Android and iOS. With BlackBerry Messenger due to be released for Android and iOS in September, BlackBerry are clearly making a bid to secure their position in this business world in this generation of mobile devices. Companies that have not chosen to adopt their handsets can still make use of their infrastructure while operating a “bring your own device” policy, allowing them to draw on the various strengths of multiple mobile operating systems. Given that BES 10 is currently being used by more than 60 percent of Fortune 500 companies, with 18,000 servers in place (a third of those having gone online in the last month), the future is looking good for BlackBerry’s expansion from mobile phone maker to mobile IT infrastructure providers.

How To Choose The Right Plastic Injection Moulding Services?

by Van P
Join the Conversation