At no other time in history has propaganda been printed so extensively as it was in the First World War. It was leveraged by every country in the struggle, and had a tremendous impact on the course of the war. Unfortunately, though, WWI propaganda was often ugly. Nations on both sides of the conflict routinely spread lies amongst their own citizens, valorized atrocities, demonstrated racism, and leveraged propaganda as an instrument of underhanded manipulation.

So when WWII began, many who were disgusted by the propaganda still lingering in recent memory were wary of the renewed potential for malfeasance and totalitarian-style manipulation. 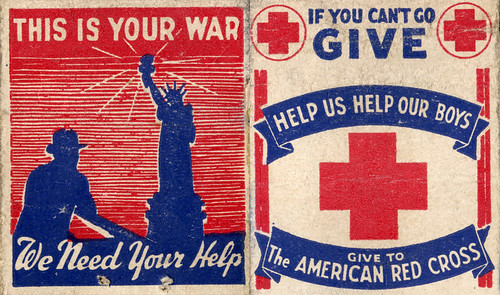 But for better or worse, propaganda is an essential tool of war. So learning from past mistakes, the Allied forces crafted a new type of propaganda—one that would lead them to victory without oppressing their people with lies and falsified information. Here’s how printing factories helped win the war:

The Office of War Information oversaw all wartime propaganda produced in the US, vetting it for incendiary material, accuracy, and consistency.

Developed in conjunction with the OWI, the Writers’ War Board helped writers in the US circulate work that contributed to the war effort. Some of the material was produced by official request, while much was the result of personal patriotic agendas. In any case, books played a crucial role in shaping public opinion, particularly in the years following the end of WWII. Literature exerts long-term influence, and the books published with the assistance of the Writers’ War Board sought to set the historical record straight and prevent future world wars.

The Impact of Propaganda Posters

Posters were the most common form of WWII propaganda, both in the US and Europe. In the States alone, more than 200,000 designs were created. These were posted in public places such as post offices, building walls, streetlight posts, and railway stations. Prominent themes focused on conservation, recruitment, increasing production, secrecy, and the need for women to contribute to the war effort at home.

Throughout the UK and US, the messages ranged from simple motivational content––“You Can Do It!” and “Keep Calm and Carry On”–– to instructions on how to conserve or recycle materials for needed for the war.

With an entire squadron of B-17 bombers dedicated exclusively to dropping leaflet propaganda to the German and Japanese people, tons of leaflets fell on the Axis territories during WWII. In Germany, the Allies dropped counterfeit ration books and money for the enemy troops, along with ‘Safe Conduct Passes’ to encourage them to surrender. In Japan, they dropped notices to civilians informing them of upcoming bombing raids and encouraging them to overthrow their government.

The British Ministry of Food played a crucial role in educating citizens about rationing, healthy eating, growing their own gardens, and staying fit during the bombardment of London. Their posters remain iconic today.

Magazines ranging from Lady’s Home Journal to pulp westerns and detective fiction featured content to educate citizens and shape public opinion to support the cause. Meanwhile, newspapers were not censored from publishing negative information about the war’s progress, but focused their efforts nonetheless on boosting morale and painting a clear picture of the need for each man, woman and child to help the war effort.

Of course, not all of the propaganda produced during WWII was constructive. While much of the negative propaganda circulating amongst the allies focused it’s attention directly on Hitler and Hirohito, there was inevitably a great deal of racist material being distributed, and many negative sentiments were held against the Japanese and German peoples. In any case, much of the propaganda of WWII was positive, encouraging, and ultimately played a key roll in giving the allied forces the moral and resources they needed to win the war.

Mark Rutherford is a history buff and writer, who’s currently penning for PrinterInks.

Celebrating A Joyous Time In The Green Valleys Of Lonavala