Penang is a Malaysian state with a long history of colonialism and free trade. It began as an uninhabited island (now Penang Island) which was part of the Sultanate of Kedah, and was ceded to the British East India Company in 1786 in return for military protection against Siam. This promise was never fulfilled, but the British East India Company took possession of it anyway and used it as a strategically useful place in which to harbour trading ships. 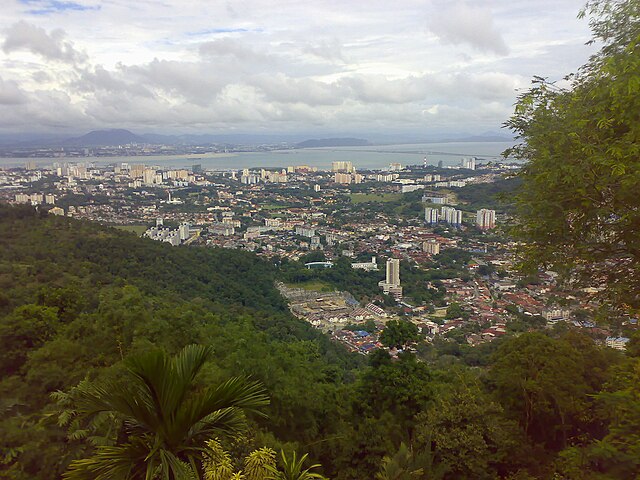 The settlement, which is now the city of Georgetown, grew quickly, due to the island being declared a free port, and trade did well for many years.

On 28 October, 1914, the German cruiser SMS Emben sank the Russian cruiser Zhemchug outside the port in the North Channel, killing 89 crew. The German cruiser was pursued out of the immediate area by the French destroyer Mousquet, but turned the tables on the Allied ship and sank it, killing 57 crewmen including the captain. This became known as the Battle of Penang, and was the island’s only direct involvement in the First World War.

It wasn’t so lucky the second time around.

Because of Penang’s free trade status, it enjoyed a huge prosperity throughout the early half of the 20th century. However, because it relied on western visitors and traders, the Wall Street Crash in 1929 led directly to an economic depression on the island, and before it could recover from this, World War II broke out.

British settlers left the island as they learned that the Japanese Army was planning an attack, and the resulting invasion led to three years of Japanese occupancy, characterised by starvation, torture and executions. It was a fearful time, difficult for members of the population to know who to trust, and many people hid in the plantations, away from the towns.

Penang became a U-Boat base from 1943 until the end of the war, harbouring U-511, and later, U-178, which effectively began the U-boat campaign in the Indian Ocean.

Because the British had abandoned Penang and left so many people to their fates under the Japanese during the war, Britain was unable to recoup her invincible image in the region. By 1946, Penang became part of the Malayan Union, and then in 1948, a member of the Federation of Malaya. The federation gained in dependence 9 years later, and in 1963 Penang – both the island and the section of mainland peninsula opposite (known as the Province of Wellesley) – became one of Malaysia’s 13 states.

Independence was marked by political change several times over, until 1972. Initially run by the Malaysian Chinese Association, which was one of three political parties which made up the ruling coalition, it was overcome at the 1969 general elections by the Gerakan Rakyat Malaysia party. This led to riots and for the next two years, the government was run by the National Operations Council in lieu of proper democratic process.

Democracy was restored in 1971, and the Gerakan Rakyat Malaysia party joined the ruling coalition in 1972, and governed Penang until March 2008.

Modern Penang, both island and peninsula region, is a diverse and exciting place to visit, teeming with culture from all over the South Pacific and still showing off its European influences. Although it lost its free port status in 1969, it continues to enthral and entice visitors and immigrants from all over the world.

Modern Georgetown is a bustling, thriving city with a unique culture made up from Malaysian, Indian and Chinese roots. It is now a UNESCO World Heritage Site. Trishaws – three-wheel bicycles with a rear-facing seat – are superb for tourism purposes, and can be hired by the hour, or by the day, with the driver as a tour guide.

The architecture runs from British colonial buildings to modern skyscrapers, with everything in between. Hotels range from the colonial Eastern & Oriental Hotel, to the luxurious Parkroyal Penang Hill Hotel.

Food in Penang is well-known in Malaysia as being of a high quality and beautifully fresh and many different types can be eaten on the streets or in high quality restaurants and hotels. The food is, of course, as diverse as the population.

Through his recent Malaysian travels, brett has gained a valuable insight into the history of the country, and the states within. He aims to share some of the best history from the country, to ensure future travellers can have a great journey back in time when they travel.

Climate Change: Is It Real & How Can You Know If You Are Influencing It?