Snoring has been going on for as long as the human species has existed and even as different cultures addressed it differently – some saw it as a sign of well-being while others shunned it – it still remains a big issue to date. About 25% of the adult world population snore. The impacts of this are many, not least among them being a symphony of noise that’s a real seismic event. An average snore reaches between 60 and 80 decibels, so you can do the maths.

Where does Snoring come from?

The usual culprit blamed for snoring is a nose or throat obstruction. All sorts of conditions lead to snoring, from swollen tonsils to stuffy noses caused by allergies, excess weight, adenoids and congestion from respiratory infections. The physiology of the snorer can be a cause too, such as a longuvula or oversized soft palate. It can also be as a side effect of medication, such as the throat closing in on itself or tongue slackening due to the throat and tongue muscles weakening. During sleep, air tries to pass through the obstructions and in the process a sonorous snoring sound is produced.

What are the Effects of Snoring?

True enough, snores can be used as a source of great humour. However, there is a very serious, even tragic, side to snoring. It can be a sign of a serious health condition. An extreme condition of snoring is known as sleep apnea, which is characterized by repeated loud snoring and intervals of breathing pauses during sleep. Each of these pauses can last between 10 and 30 seconds. It heightens the likelihood of the snorer waking between episodes and this is why people with sleep apnea usually get poor night’s sleep. As a result, risks of memory loss, daytime sleepiness, heart problems, and high blood pleasure are multiplied. In children, snoring problems can be a sign of ADHD (attention deficit hyperactivity disorder). 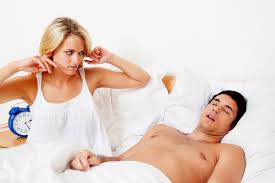 It is not just the snorer who gets sleep disturbances – roommates and spouses can attest to this. It is estimated that people who share rooms with snorers lose about one hour of sleep every night. The noise levels can also cause higher blood pressure.

Solving the Snoring Problem
The approach you take to solving a snoring problem will usually depend on how severe the problem is. Treatments are many, ranging from surgeries to sleep aids and even devices. There are nose strips designed to hold a snorer’s airways open when they are sleeping. The jaw can also be repositioned for an uncongested breathing system using dental devices. Some people opt for surgical removal of the uvula, or a tightening of their throat muscles.

With research always leading to new solutions, it has been discovered that playing wind instruments can strengthen the upper airway muscles, especially the Aboriginal instrument known as didgeridoo, hence preventing the collapse that causes snoring.

You can take a step-by-step approach. Start by treating the source of the snore, like losing excess weight and clearing up congestion. The solution can be very simple, like changing the sleeping position: sleeping on your back increases the chances of snoring while sleeping on the side or propping your head a few inches off the bed reduces it. Avoiding alcohol, antihistamines, and sedatives before bedtime is also helpful. For heavy snorers, a doctor’s advice is recommended.

Acupressure has been used to promote relaxation and wellness and to treat disease for many years. The Chinese have practiced acupressure for more than 5,000 years. Try the Yin Yang anti snore ring to help you stop snoring.

UV Gel Nail Polish – What Are the Advantages and Disadvantages

How To Buy Properly Fitted Clothes