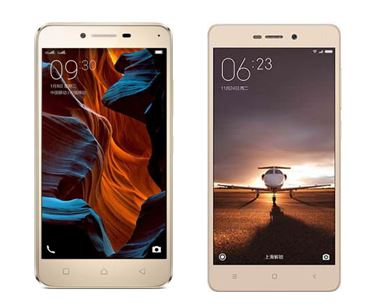 If you are thinking about purchasing any one of these devices, let’s put the Lenovo Vibe K5 and Lenovo Lemon 3 on the table and compare their specs to find out how they stand against each other.

Talking about the design first, the Lenovo Vibe K5 sports a premium appealing design. The phone flaunts a metal unibody design with rounded edges and a removable back panel. The phone measures 8.2mm around the waist, and tips the scale at 150 grams. The Vibe K5 also gets Dolby ATMOS-powered speakers on the back to deliver premium audio experience. The Lenovo Lemon 3 also comes with a similar metal unibody design as the Vibe K5. It also measures 8.2mm around the waist as the Vibe K5, but is slightly lighter at 142 grams. The Lemon 3 also gets MaxxAudio and Dolby Audio-powered speakers on the back. So when it comes to the design, there’s hardly any difference between the Lenovo Vibe K5 and Lenovo Lemon 3.

Moving on to the configuration, the Lenovo Vibe K5 is powered by a 1.4GHz octa-core Qualcomm Snapdragon 415 system on chip. Its performance is further enhanced by 2-gigs of RAM and an Adreno 405 GPU. The Lemon 3 on the other hand is fuelled by a more powerful 64-bit octa-core Qualcomm Snapdragon 616 processor, further supported by 2-gigs of RAM and an Adreno 405 GPU. So when it comes to the performance, the Lemon 3 delivers better experience than the Vibe K5. For storage, the Vibe K5 and Lemon 3, both offer 16GB of internal memory. The former accepts microSD cards up to 32GB in size, while the latter accepts memory cards 128GB in size.

For imaging, the Lenovo Vibe K5 and Lemon 3, both the smartphones offer identical specifications. They are equipped with 13-megapixel primary shooters with LED flash, ISO control, HDR, continuous shooting, Face Detection, Touch to focus, and full HD video recording support at 30 frames per second. For selfies and video calling purposes, they are loaded with 5-megapixel secondary snappers on the front.

In terms of connectivity, the Lenovo Vibe K5 and Lemon 3, both devices offer similar features. They come with 4G LTE including support for Indian 4G LTE bands, dual-SIM slots, Wi-Fi, Bluetooth, micro-USB 2.0, FM Radio and GPS. Both smartphones are powered by 2,750mAh batteries, which can last for a day easily on regular usage.

As you can see above, the Lenovo Vibe K5 and Lemon 3 offer quite similar specifications, including premium metal unibody designs, close-to-phablet grade displays, decent internal memory, decent camera features, solid battery life, and latest software experience. However, the Lemon 3 gets a better resolution display with higher pixel density, and a more powerful octa-core processor. As for the pricing, the Lenovo Vibe K5 price is expected to fall between Rs 7,000 and Rs 8,000 in India, while the Lemon 3 is currently on sale in China for around Rs 7,200. If Lenovo brings the Vibe K5 in India in the sub-Rs 6,000 range, then it’s a good device to go for, but if priced higher, than the Lemon 3 is a much better offering. So, which one of these devices have caught your attention? Share in the comments section with us all below.

5 Reasons To Buy A 4G-Capable Smartphone