Recently Apple launched its new iPhone 5s and iPhone 5c. However, it turned out to be a disappointment for some. While for others it was just fine. As a result, this new device could not compete well in market as compared to, especially, Samsung Galaxy Note 3 and some other new releases. So this makes it obvious that Apple will definitely be unveiling something great and unmatchable to make a high position in market.

Also if we consider the history of Apple iPhone, we come to know that from 3G onwards, there has always been a half model named ‘s’ before the next numbered iPhone. As iPhone 5s is already here, it is more likely that somewhere in 2014, iPhone 6 will be there. So this is confirmed that there are high possibilities of iPhone 6 which is expected to bring something really amazing. So now let’s have a look on the rumors and news about the upcoming new device. 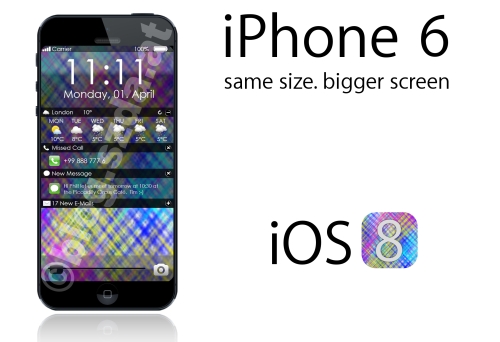 This time it is expected that Apple will bring some changes to the traditional iPhone design. Instead of the usual shape, it will be having curves on back. This feature can make it more comfortable to use by fitting better on palm. Other than that the screen is most likely to be of around 4.7 inch and a plastic back is also possible. It is suggested that iPhone 6 can have different size variants which will be definitely something new. However, such variants are no way easy to introduce.

With the new device, new software is also expected. iPhone 6 will run IOS 8 which will soon released in 2014. The new software will definitely bring some major changes to user interface and also add new features to make it better than any other previous versions.

The new device will be having a 13 megapixel camera. Previously Apple has been getting its camera sensors from Sony and this time same is likely to happen. The interesting thing is that the camera sensor will take less space while maintaining the image quality. This will definitely make it look better. Furthermore, iPhone 6 will be able to remotely control all the external illuminating devices and flash. This will give better results which may be somewhat comparable to studio photography.

Despite all those latest releases by Apple’s competitors, wireless charging is still not that common. So it is a good chance for iPhone 6 to attract more users if it succeeds in delivering with wireless charging, especially for multiple devices at a time. This wireless technology may be further expanded by adding wireless volume control as well. As the mobile is moved away from ear, the volume is automatically adjusted. Such features will really be a nice surprise for all iPhone fans.

iPhone 6 will be having Retina+ display and so full HD 1080p resolution. It is widely rumored that this time, Apple will be announcing two different sized versions with different screen sizes. The screen sizes are expected to vary between 4 to 6 inches. However, 6 inches is somewhat too large. So there is still not much information about the display but of course rumors have no limits. Some people even predicted 3D technology in iPhone 6.

There is no doubt that Apple has always been successful in providing with sufficiently well processor with a high speed and efficiency. So it is more likely that this time also, Apple will be giving a high quality processor. It may be quad core A8 or an evolved version of A7 which is not a huge surprise while considering the iPhone’s previous history in this case.  This upgrade will be improving the efficiency along with battery life.

The all above information is mainly based on rumors rather than official news. This is why one cannot say that iPhone 6 will be exactly as described here. Rumors are, most of the times, based upon the expectations and demands of users. So if Apple wants its new device to be competitive in market, the company must consider such rumors which may meet the expectations of users.

This post is written by M. Azam who is a blogger and journalist. He has written number of posts on latest gadgets, Smartphone apps and their protection. He has previously written articles for European brands like Protect your Bubble UK which offers best iPhone insurance quote to their customers.

Things Your IT Department Knows That You Should, Too

Antivirus: A Seatbelt For Your Computer