While it’s of course safe to say that there are more immediately dangerous things on building sites than inanimate objects like steel beams and RSJs, this doesn’t mean that structure steal cannot be a hazard in its own right. In fact, it’s exactly this kind of thinking that leads to the kind of complacency that breeds trouble for building site workers. Quite simply, the more you take something for granted as insignificant and of no real threat, the more likely it is to jump up out of nowhere and deliver a rather nasty surprise.

In the case of steel beams this can be a rather tricky idea to take on board. After all, they aren’t the kinds of building supplies that tend to move of their own accord, disappear into the background or generally get up to mischief, so how is it that hundreds of injuries each year are caused by steel beams and RSJs specifically?

Well, according to the experts at wesellrsj.co.uk it all comes down to discrepancies and bad habits in the way they’re stored, moved and handled in general. It’s crucial to identify all hazards where they exist, which in the case of the building site is pretty much everywhere, but when it comes to structural steel supplies is generally takes little more than basic common sense to avoid all common accidents across the board.

For example, every site worker across the boards knows the importance of wearing the right PPE for pretty much any job they tackle. However, the actual number of such workers per 100 that follow all PPE rules to the letter day in and day out, you could count on the fingers of one hand. The trouble is, it takes one tiny slip up due to PPE ignorance to result in genuinely life-changing injuries. In the case of structural steel, gloves must be worn in order to rule out the chance of suffering cuts or abrasions. Protective footwear is also a must in case anything is accidentally dropped, while masks and eye protection must be worn while working on the steel with any kinds of tools, manual or powered. 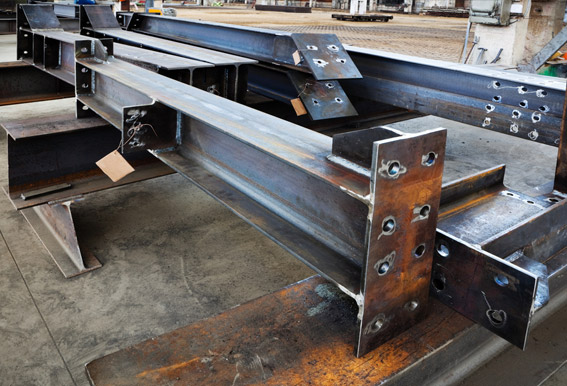 In the case of the smallest steel beams and RSJs, chances are it will be easy enough to lift and manoeuvre them manually with the help of other workers and the right PPE. However, each site should set strict limits by way of sizes, shapes and weights which are allowed to be handled manually, with anything exceeding such limits being handled only by use of the correct machinery. It’s all too common for workers to push themselves that little bit too far just to save a little time or for the sake of convenience, resulting in pulled muscles, broken toes and all manner of other injuries. On the whole, it’s a risk that just isn’t worth taking.

It’s not as if structural steel supplies are ever likely to get up and start causing chaos of their own accord, but this doesn’t mean they aren’t in the habit of causing accidents if stored incorrectly. Once again, common sense dictates that heavy steel beams and supplies should be stored in a designated area that’s flat, level, stable and clearly visible. Loose ground or steep inclines can easily result in stacked steel beams sliding or falling, just as those that aren’t clearly visible can be tripped over or banged into in poor lighting. And of course, it’s crucial to be sensible with just how many can, or at least should be stacked on top of each other at any one time.

Should the need arise to manipulate any such steel supplies in any way, there will be a designated tool for the job and a safe way of going about it. To ignore or overlook the importance of these rules can result in disaster as to attack steel beams or RSJs with tools not suitable for the job can result in fragments of metal becoming dislodged and shooting out at high speed, which could of course result in serious injury or worse. Suffice to say, this is also an instance in which the PPE rule applies in a big way.

Last but not least, it’s a proven fact that in a quite alarming number of serious building site accidents every year, the primary cause was nothing more than trying to rush a job to completion. In the case of heavy steel beams, for example, rushing things forward at an unsafe speed is largely guaranteed to result in something untoward happening sooner or later as the faster you attempt to move, the less control over the situation you have.

How to Make Recycled Planters

What Home Automation System Is Better? Crestron Or Savant?

Home Handyman: What Every Man Needs In His Toolbox