Ultraviolet visible spectroscopy, or UV/vis, uses light in the invisible and adjacent ranges of the spectrum to determine different analytes. This can include metals, biologicals, or organic compounds, as a for instance. UV/visible spectrum spectroscopic analysis is routinely used both as a standalone and in conjunction with other methods.

Recently, HPLC has been gaining popularity, especially in the biologies, life sciences, and pharmacological research. As a separation technique, it is highly efficient and highly accurate, as well as particularly useful in situations where the compounds may have little to no absorption or be otherwise unsuitable for spectroscopic analysis.

In simplest terms, HPLC analysis involves several phases. In the mobile phase, a reservoir holds the solvent, while a high pressure pump manages delivery at a specified flow rate. An auto sampling injector introduces a sample to the flowing solvent. This is carried in the HPLC column, where a porous material separates it, in the stationary phase. At this phase, a detector is used to view the separated compound, and the remnants of the mobile phase is collected for waste or studied further. The system produces a chromatogram, or a graphic representation of the chemical separation. It allows precise identification of the compound components. Alternately, depending on the specific nature of the application, electrophoresis, phase extraction, and ion mobility spectrometry have been proposed as methods. 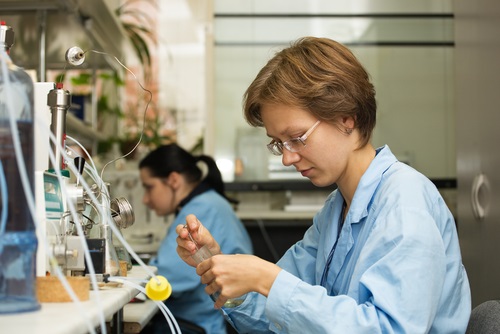 UV/vis has a number of advantages which make it an ubiquitous feature in research:

HPLC also has a number of advantages:

Fundamentally, there is no official “right” or “wrong” way to go about sample analysis. The equipment chosen may vary from project to project or within a given project. However, HPLC is the most common, showing up in everything; quality control, product comparisons, reverse engineering, pharmaceutical development, biochemical research. The challenge for the technician or researcher becomes selecting the appropriate tool for the job, which requires experience, as well as a detailed understanding of how each method works, and toward what goal.