The Roaring 20’s was a time infused with an overall sense of patriotism and optimism following the harrows of World War I. Involving a boom in jazz music, women redefining gendered societal standards, and innovative technology in multiple industries, some found the Roaring 20’s to be a bit of a racy time period. Some found it liberating.

Advancements in electricity, film, and cars were made, and in contrast to this innovative movement, Prohibition began in 1920, which lasted until 1933. It’s commonly known that during the Prohibition it was illegal to use, transport or sell alcohol. However, the consumption of alcohol rose during Prohibition, and today it’s widely regarded as a glaring example of failed government regulation. But what does any of this have to do with today’s drinking culture? Well, you may be surprised to know that some modern alcoholic beverages were created during the Roaring 20’s. Among the most popular drinks were those involving gin — including martinis, mint juleps, and mixed drinks.

Bathtub gin was extremely popular during the Roaring 20’s. Low-quality gin was made during Prohibition due to vendors not being able to obtain high quality ingredients. Many amateurs began producing liquor, resulting in bathtub gin. It was called bathtub gin because it was made in a tall bottle — so tall, in fact, that it could not be topped off with water in the sink. Many people filled it up in the bathtub for this reason, and that’s how it got its name!

Common martinis from the Prohibition period and current martini variations alike owe their existence to the bathtub gin. In the Roaring 20’s, this monumental, classic drink was a mask for low-quality, poor-tasting gin. Bartenders could not easily get liquor so instead they masked gross gin using other types of alcohol, juices, sweeteners, syrups and soft drinks. 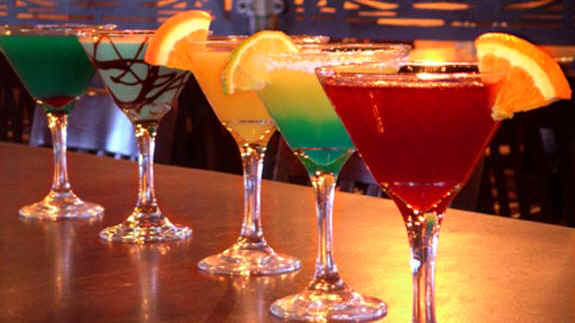 One rendition of a martini during The Roaring 20’s contains two parts gin and one part vermouth. The vermouth was meant to mask the gin. Many other martini variations were consumed during the 1920’s containing various kinds of hard liquors and fruit juices. The fruit juices masked the gin as well.

It’s likely that mixed drinks became commonplace during Prohibition for the same reason. Only half of the drinks needed to contain hard liquor, and the other half was a sugary substance. Commonly mixed drinks were vodka and orange juice or vodka and cranberry juice. Additionally, Coke and whiskey was popular, which is especially notable since Jack and Coke remains a highly popular drink today.

Although invented prior to 1800, the popularity of the mint julep rose after The Great Gatsby was published in 1925. A refreshing, summer drink, the mint julep involved four to six mint leaves in a Collins glass along with one teaspoon of sugar and two teaspoons of water. Mix all that up, put in a desired amount of crushed ice and a half-ounce of bourbon whiskey. To top it off, decorate the rim with a couple mint leaves attached to its branch. This classy drink was also sometimes made with gin instead of whiskey. You could access this drink at nearly every juke joint and speakeasy across the nation during the prohibition.

Even though this era is long past, the popular drinks of the time remain with us. Although Prohibition is widely regarded as a failed experiment of government regulation, a lot of creative and popular drinks stemmed from this moment in history.

Written by the staff at Willie’s Pub and Pool. Willie’s has great drink specials and is one of the most atmospheric bars Columbia MO has to offer.

Which Are The 7 Super Foods?

Green Juice Recipes That You Can Savor Every Morning