Apple is synonymous with iconic advertising. Over the years Apple has created some of the most memorable advertising that one can recall. Steve Jobs, the founder of Apple is an enigma for not just the superior products he marketed but also for the way he marketed them. Let’s take a trip down memory lane then, looking at some of Apple best ads and reasoning why they were so damn good. 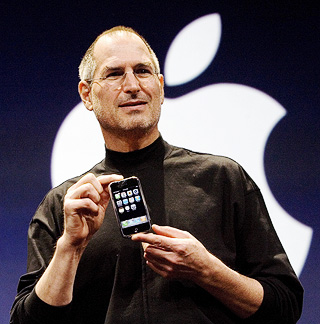 A Is For Apple

This is one of the most powerful Apple print ads of all time. Take a look at the slogan – “A Is for Apple.” It has power beyond compare. It associates one of the basic elements of language – the first letter “A” with the Apple computer. By doing this it triggers amazing brand recall. The slogan is great but so is the rest of the advertisement.

The advertisement goes on to mark Apple as “The first thing you should know about computers.” The ad is in colors that are easy on the eye. This makes the advertising message pleasant and easily acceptable. The figure of the apple is in six colors and this makes the Apple universal in the mind. Apple is touted as part of the thrill of personal computing. It is described as a home, personal and classroom computer, in essence – the user’s computer.

The advertisement signs off with contact details and a simple call to action. Amazing marketing stuff

This iconic advertisement features Adam in the Garden of Eden, snake and all, hiding behind an Apple computer. The tagline goes “We’re looking for the most original use of an apple since Adam” The way this ad connects the Apple computer to one of the original mores of creation of mankind is brilliant. So are the striking visuals. Everyone is interested in what the Garden of Eden looked like.

This ad shows us that Garden of Eden along with a subtly pronounced advertising message. The ad is actually a creative competition. Viewers are urged to send in their entry in 1000 words or less about “What in the name of Adam do people do with Apple Computers?” The winning entry is promised an all expense paid trip to Hawaii. Subtlety, power and innovativeness made this one of the best Apple print advertisements of all time.

The Efficient/Wise Kind of Man

This advertisement begins with the slogan “What kind of man owns his own computer?” It a tough pointed question and raises in the mind of the viewer a question – “Am I that kind of man?” This ad came at a time when it was a revolutionary idea to own a personal computer. The leading question is answered simply in the ad – that the computer can be owned by anyone who wants to better himself who wants to be more efficient.

The ad goes on to say that it is a wise man who owns an Apple – the computer that is not worth waiting for. The ad is simple and point blank and includes a strong call to action. It has all the elements that make an advertisement successful.

This ad made a premise about Apple Computers.” Imagining it is complex, using it is simple, creating it is revolutionary.” In a few simple words the essence of the Mac was captured. The ad used colors simply and effectively. The copy talked about how Apples were designed for efficient use by humans. The creativity of the designers was captured. The ad ended with a call to visit Apple’s website. A remarkably succinct and powerful ad.

Apple has created some of the most enigmatic advertising in history. We hope it has been a pleasure for you to examine a tiny part of this advertising. The product has matched the expectations raised in the ads. It’s no coincidence that A is for Advertising and A is for Apple.

This is a post by Ashley Williamson. Ashley is an occasional blogger and a full time marketing specialist currently writing for banner4sale a company which offers affordable digital banners.

How To Find A Construction Job

How To Start An International Import/Export Business