Whether you think they’re gross, cool, or just creepy-crawly, bugs are something that few people can ignore when they’re around. However, there are a lot of things about them that are surprising. Take a look at a few insects under a microscope sometime, and you will find that there is a lot more going on than you would first think. Here are five things to keep in mind when you look that may bring some insight into the amazing things you are seeing:

Insects Use Different Sensory Organs Than We Do: Because we experience the world through our five senses, it’s tempting to believe that this is the only way. However, there are many more things that insects use to know the world that we are just beginning to understand. Many insects have compound eyes, which means dozens and dozens of eyes instead of two. Whether they see multiple images, or one very clear image (like we see a single thing with our two different eyes) is unclear, but it is shown that they can see almost completely around their heads with these eyes. Many can also see in different light spectrums, like ultraviolet light. Scout ants will use chemical trails to tell others about an area, dropping different scents to let them know about dangers, food sources, and new ways back to the nest. Leaf hoppers speak to each other via vibrations along the stem of the plant where they’re sitting.

Insects Often Work in Groups: Ants, bees and termites are colonial species, and instead of doing all the different things that we do, will be born to do a specific job: queens birth babies, foragers will find food, other workers build and excavate nests. Nurses care for the queen’s babies, and soldiers protect the nest. There are some more specialized colonies of ants, like leafcutters, who have farmers as well that grow an edible mushroom on the pieces of leaves they cut. All of these colonial species are women. The few men who exist in the colonies are exclusively around to breed with the queen, and may only live a few days or weeks in the life of the nest. 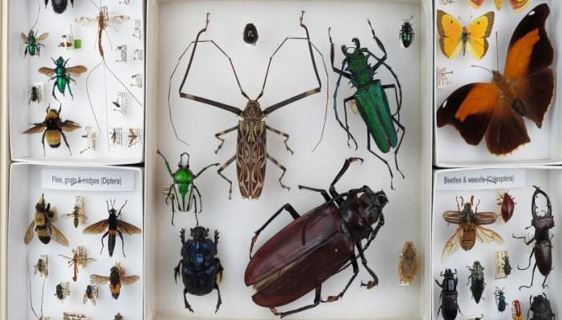 Insects Have Superhuman Strength: A flea can jump six feet in the air- hundreds of times its own height. Ants can carry many times their own weight in food back to the nest. Dung beetles roll giant balls of their favorite food back to the nest. If this were to translate into human powers, we would be able to carry our cars and RV trailers, and jump over skyscrapers.

The Skeletons of Insects are on the Outside: Insects have no bones, but their hard shell on the outside protects them the same way. Because this is such a strong surface, they need to have tiny holes throughout this armor called spiracles to be able to breathe.

Insects Who Metamorphose Completely Reinvent Themselves: When caterpillars enter a cocoon, they don’t just grow like people do, or even like babies in a mom’s stomach. There is an acid that turns them all the way into liquid, before they begin to build back up again into a butterfly. This amazing process is almost impossible to see, because to break the cocoon would kill the creature.

Bottom line, the insect world is fascinating. By studying them we can better understand how they all play an important role in our world.

The idea for this article came from microscope.com, the best online retailer of microscopes.

Joseph Tramantana: The Name In The World Of School Finance

Careers In India After Studying BBA In Entrepreneurship