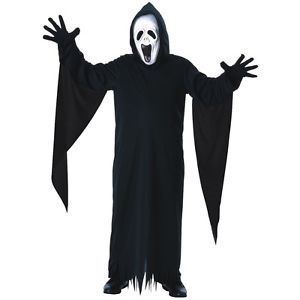 There are plenty of Film Fancy Dress Costumes around. Dressing up as a movie character is what people of all ages love to do, such as at Halloween. Here are some of the most popular movie fancy dress costumes that look terrifying:

Although he has become a comical figure, in particular because many sequels to ‘Friday the 13th’ aren’t as frightening as the originals, Jason Voorhees’ costume is still scary. Wearing a hockey mask to hide his deformed face, this costume is popular with people of all ages. A plastic machete and a brown shirt are usually included with a Jason Voorhees costume. To make it even more terrifying, cover Jason’s machete with fake blood.

Many movies have been released that feature zombies. Although some are more memorable than others, zombies are still scary characters. By choosing a bodysuit zombie costume, no make-up has to be applied. In fact, an entire family can be zombies at Halloween where they will scare everyone who sees them.

A Mummy costume doesn’t have to be made out of bandages. Just like the aforementioned zombie costume, a Mummy outfit can also consist of a bodysuit. Countless hours won’t have to be spent on applying bandages because, within seconds, the transformation will be complete where its wearer will look just like a member of the walking dead.

The 1988 movie ‘Beetlejuice’, which was directed by Tim Burton and starred Michael Keaton as the title character, has a huge cult following. With blackened eyes and whitened face, Beetlejuice is both a scary and heart-warming character, especially as he tries to help those around him. An entire Beetlejuice costume can be bought and also a face mask which looks just like him. As this costume is popular with people of all ages, it can be worn throughout the year. It is, obviously, a great costume to wear at Halloween and also Christmas. When a Beetlejuice costume is worn, a group of friends can be other characters that were also in this movie such as Adam and Barbara Maitland.

A terrifying character from the original ‘Star Wars’ films that were released in the 1970’s and 1980’s, a Darth Vader costume still looks menacing decades later. It can be worn by a father and son whilst trick or treating because it can be bought in a variety of sizes.

A funny film, ‘The Addams Family’ starred the likes of Angelica Huston, Christina Ricci and Christopher Lloyd. A memorable character from ‘The Addams Family’ is Uncle Fester. Wearing a black robe and with a bald head, an Uncle Fester outfit is one of the most popular Film Fancy Dress Costumes around. Every accessory is usually provided such as a robe and a mask that looks just like Uncle Fester. As it doesn’t take long to put this costume on, the person wearing it can soon be this much-loved character. Visit this link for more great fancy dress ideas.

Preparing For The Big Moment: 5 Things To Anticipate In The Delivery Room

Some Dresses You Should Never Wear To A Wedding

Mentorship: 4 Ways Having A Life Coach Will Help You Succeed in Your Professional and Personal Life