Kevin O’Leary is a highly talked about personality of the business world today. He is projected as a hardworking entrepreneur and a role model for the youth. He is now a darling to the capitalist controlled media.

He was born to a middle class family in a suburb of Montreal, Canada. His mother was a Lebanese and his father was an Irish salesman. His parents were not maintaining good relations among themselves and were divorced while Kevin was still a teenager. His practical mother soon caught hold of an executive gentleman named Mr. George Kanawaty and remarried him. Mr. George was an executive in United Nations ILO counsel. 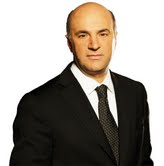 As a teenager Kevin was not very promising. He used to keep long shaggy hair and was fond of Guitar. Photography was also his other passion. He was not interested in study. With all these features, he was considered at par with the ordinary folks having no future. His step father was very much annoyed with his attitude and used to have long discussion as to how he should plan his future. Mr. George was a strict person and gave stringent guideline to Kevin for shaping his career.

The family moved to Waterloo, Ontario. Kevin O’Leary had his education in Waterloo. Later on due to the persistent effort of his parents, he managed to build a good educational background. He was in Royal Military College, Saint Jean, for two years. He obtained his bachelor’s degree from the University of Waterloo. He also completed his MBA from Richard Ivey School of Business at the University of Western Ontario.

Here it is worth mentioning about one of his part time job, that his step father got him during his teens. It was an ice cream shop. The very next day the lady who was the owner of the shop, ordered Kevin to scrape the floor to wash out the solidified ice cream wastes, by kneeling down. This was not acceptable to Kevin, then inexperienced about the employer-employee relationship. He refused which infuriated the owner and she fired him. These experiences lead him to decide that he was never to be an employee and shall be the master of his own.

Accordingly, immediately after completing education, he along with two friends started a company named Special Event Television Company, which was not very successful. But in the times to come he would become a very popular media personality, hosting his own shows as well as many other shows, of which Shark Tank is a very popular one.

One should surely read Kevin O’Leary’s Biography and he was recently in the news for his harsh and abrasive comments which now seemed to have ruffled feathers of the environmentalists, and that took a very young environmentalist and social activist Rachel Parent. Rachel Parent has directly challenged O’Leary to a debate on Monsanto’s genetically modified food products, known to us as the GMO’s. This was after Kevin O’Leary had tried to dismiss the worries about the ill effects of GMOs on the environment and on the health of the people consuming it by calling them outright stupid.

Commenting on the burning issue of GMOs, Kevin O’Leary sided with Monsanto, portraying it as a hero of a kind. And Kevin O’Leary’s answer to all those worries about GMOs is as simple as stop eating!

The controversy over GMOs continues and people like Kevin O’ Leary and master minds of Monsanto see only the profit and the productivity, turning a complete blind eye on the immense ill effects of the GMOs. They care none about the plights and suicides of poor farmers in the developing countries like India.

Writer works in and SEO firm and is into content writing. He knows well how to write articles that could rank the site high.

Tips To Choose The Right Residential Roofing IN Canton Michigan

Food Safety: How To Make Sure That Your Company’s Product Is Safe For Ingestion