Volkswagen recently introduced Ameo compact sedan, and the current vehicle on sale is available with petrol engine only. During the 2016 July period, the company an admirable 6.75% profit contributed by the sale of 4,301 units higher than 4,029 units rolled out same time last year. The highest sales were generated by Ameo with 2,200 units and the second highest contributor is Polo with 1047 units. 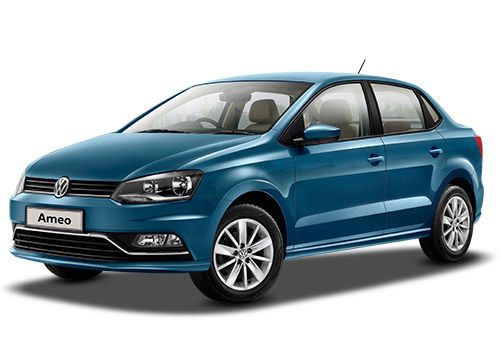 Ford Aspire is a strong contender of Ameo and Ford has sold 748 units of the car, and this sale figure is significantly lower than Ameo. Honda Amaze is a strong rival as well, and during the 2016 July period 2309 units of the car was sold. The response for Ameo has been impressive considering the fact that it launched just a few months ago in June. However, Volkswagen has not managed to sell Ameo in high numbers when compared to some of its competitors. Hyundai sold 4585 units of Xcent and Maruti Suzuki has rolled out 19,229 units of DZire.

The company is going to launch a diesel Ameo as well, and according to recent reports the car is going to launch soon. Now for the topic of interest, is the diesel car going to have a good impact on sales, and will the addition of a diesel model create wider consumer interest. Let us browse through the features of the petrol and diesel car and come to a conclusion.

Ameo is engineered on an advanced PQ25 platform and it strongly resembles the trendy Polo hatchback. This is a stylish compact sedan, on the front is a neatly designed grille with horizontal slats on top of which is a neat Volkswagen log, and the headlights have a sharp and captivating design as well. View the car from the side and it resembles Polo to the core, and on the rear are trendy bumper and tail lights that look different from Polo. Also watch out for the amazing character line that moves from headlights and merges on to the tail lights.

The interior of Ameo is vibrant and the quality of material is top-class, the square shaped center console builds the creativity of interior design and on top of the console there are potent air con vents. Below the console you will notice a splendid touchscreen, and some of the other interesting features to watch out for is interior door handles, steering wheel, gear shift knob and silver garnish bordering center console.

Ameo petrol runs on an efficient 3-cylinder 1.2-liter MPI engine that yields potent energies of 110Nm and 74bhp. It moves on an impressive fuel-efficiency figure of 17.83km/l.

Now coming to the diesel Ameo, scores of Indian’s are surely excited by the arrival of this car, and now what are the fascinating features of this car. For those who are keen on the Ameo diesel, take a note of these features.

The car will launch sometime during the festive season mostly in 2016 October and the diesel vehicle run on a highly powerful 1.5-liter TDI mill and this same engine is used on Vento sedan and Polo hatchback. This is going to be a more powerful engine and will churn fierce energies of 230Nm and 108bhp. The engine will be linked to DSG and 5-speed manual gearbox and this is the first under four-meter car to have DSG gearbox.

The new Ameo diesel vehicle will have extra equipment and features compared to the petrol car and will be sold at a higher price as well. The petrol car is sold for an initial price of Rs 5.1 lakh and the diesel car will be offered at an initial cost of more than Rs 5.5 lakh. Recently the Ameo diesel was captured testing by a group of car enthusiasts, and the exciting part is the car is going to launch soon during the festive season.

Currently Ameo petrol is a strong profit generating vehicle for Volkswagen, the sub-compact sedan is however not a segment leader. The company has generated impressive sales with Ameo, but it is not impressively impactful with regard to the tough competition that exists in the compact sedan market.

For people who are keen on Ameo petrol, it is an interesting car to buy, it has an impeccable style statement, sufficient number of interior features, robust engine and it offers adequate safety to occupants. It is interesting to read that Ameo has contributed commendable sales despite the fact that it is offered with petrol engine only, but the competition level of the car industry of India, particularly the compact sedan segment has only increased to a new level, and hence Volkswagen is going to introduce a diesel model of Ameo.

Now for the interesting question, will the diesel Ameo create a greater impact on the profit-generating outcome of Volkswagen. The diesel car is going to have a stronger engine and will have more features as well. These are the strong selling points of Ameo diesel compared to petrol, and a majority of customers is likely to opt for this car despite the fact that it will be sold at a higher price.

The festive season is a significance of grand celebration and new beginning, and what a perfect way to celebrate it than with Ameo diesel. The already sophisticated and powerful Ameo is going to be even more plush and robust, and for people who are keen on buying the Ameo diesel, this is an excellent car to go after. This is a great car for the young, enthusiastic and ambitious demographic and when you look at the Ameo, it emits pulsating vibes and the diesel car is packed with greater energy and all the more reason to buy this car without thinking twice.

An Innovative and Fresh Frontier in Powertrain