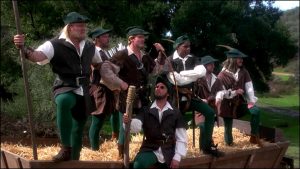 Most comedies don’t age well, because the jokes usually become outdated, but there are a few brilliant examples of comedy films that will never grow old. We guarantee that these movies will make you laugh with tears and leave you gasping for air. A few decades have passed and they are still considered some of the most hilarious masterpieces that the movie industry has ever seen. If you haven’t seen them yet, then you should definitely hurry up and download them. Here are our top three comedy movies of all time:

We’ve seen a dozen movies with Robin Hood, but as the protagonist states, none of them could speak in a British accent. It’s been 20 years since the movie appeared, and people can’t seem to get enough of it. Although we have the typical story line in which the Evil Prince John oppresses the good people of Nottingham, and Robin Hood swoops in to save the day, the manner in which it is presented is simply delicious. Not to mention the musical moments in which the men in tights sing about their good deeds and in which Robin confesses his love to Maid Marion. As we said before, some movies never grow old, and „Robin Hood, Men in Tights” is one of them.

Jim Carrey is known worldwide as the best comedian, but it was the role in the movie „Ace Ventura, Pet Detective” that truly brought him in the attention of the public. If you aren’t familiar with the wonderful work of this outstanding actor you will probably be watching this movie with your jaw dropped the whole time.  It is amazing how funny this man can be, and the story is also delicious. Via Time Warner Cable Offers, you can now watch this movie, as well as another 10,000 movies on demand.

Monty Python and the Holy Grail

The first thing that comes to mind when you think of a 30 year old comedy movie is: Is it any good? Yes it is! Monty Python and the Holy Grail is one of the best comedy movies of all time which tells the tale of King Arthur and his merry men. Although you would expect such a noble suite to be traveling on horseback when searching for such a divine object as the Holy Grail, these knights in shinny armor troll along on imaginary horses while a subject makes galloping noises with the help of two coconuts. To be honest, there are so many gags in the movie that it would be a shame to spoil them for you.

Some comedy movies are like good wine, the more you let them age, the better they get. We can’t deny that there are a lot of awesome comedy films, but these are probably the ones that have endured the test of time the best.

New Home, New You – How to Start Over in a New Place