Whether you’re a foodie that can’t resist a portion of meat or one who chooses to follow a plant-based diet, the endless menu of Indian cuisine will have a tempting option for you. However, certain parts of the sub-continent may be more suited to your palate than others.

Take, for instance, the little town of Kakori, situated in the northern state of Uttar Pradesh. The northern reaches of India are well-known for their succulent meat dishes – after all, the north is the home of the world-famous Tandoori. However, it is the famous Kakori kebab that is the prize dish of this innocuous little town in the suburbs of Lucknow.

The Kakori kebab might well be the most famous kebab in India. One of the reasons it is so notorious is, of course, due to its popularity and delicious flavour. Another is the fact that the legend of how it was developed has taken on a life of its own, passed down through the generations until nobody is quite sure what is fact and what is fiction. In fact, there are several stories as to how this delectable morsel came into being. 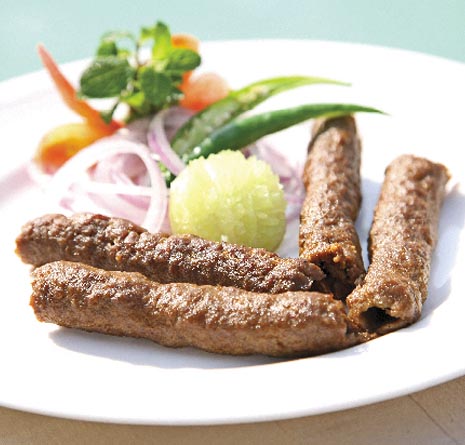 One tale, credits the Kakori kebab to the chefs of the Nawab of Awadh. The Nawabs were renowned for their love of food, particularly of sumptuous meat dishes with no expense spared. Unfortunately, this Nawab had lost many of his teeth and consequently was unable to enjoy many of his favourite meat dishes. His creative chefs set to work to create a kebab that the Nawab could enjoy – thus, the soft and flavoursome Kakori kebab was born.

However, an alternative story points to a local Nawab of Kakori who, hosted a traditional dinner in the mango orchards of the town. When the Nawab’s chefs served the seekh kebabs they had prepared for the occasion, it is said that a British officer made a disparaging remark about the food. The Nawab set his chefs to work for ten days to perfect a new type of kebab, soft and expertly spiced. The British officer sampled the Kakori kebab at the next feast and was amazed by the new flavours that were presented to him.

Although the story of the Kakori kebab may never be truly clear, these delicious kebabs hold a significant place in the cuisine of the north. Perhaps it is the velvety texture of the mutton or lamb, minced several times before it is cooked to achieve melt-in-your-mouth perfection, or the expertly blended masalas used to marinate the meat. But there is no doubt that the Kakori kebab has survived the test of time and is popular to this day.

Many of India’s most popular recipes have been passed down through the generations – many are hundreds of years old. Pay a visit to Veeraswamy, one of London’s best Indian fine dining restaurants, to experience an atmosphere that offers all the exotic splendour of the east and a menu that draws on these traditional recipes for your delectation.

6 Health Benefits Of Cinnamon You Need To Know

Tips for Getting your Kids to Eat their Vegetables