As much as some of us would love to eat certain food stuffs all year round, unfortunately a lot of fruit and vegetable varieties are seasonal and simply aren’t available at certain times of the year. But this isn’t something to be upset about – eating fresh, seasonable vegetables has a whole host of health benefits, as seasonal fruit and veg provide us with the exact minerals and nutrients we need at that exact time of year.

That isn’t to say all food is seasonal, however; some food is available all year round, such as bananas, potatoes and onions; but it’s always nice to try different things and change our diets as the months go by, keeping pace with what Mother Nature has prepared for us.

The different seasons bring different kinds of fruit and vegetables to ripeness. According to the Indian Ayurveda system, spring is a watery season, with increasing temperatures and melting snow from the winter. Because of this combination the rivers and lakes across India swell so much they can burst their banks – this helps numerous young shoots to grow and the landscape become rejuvenated after the sometimes harsh winter. 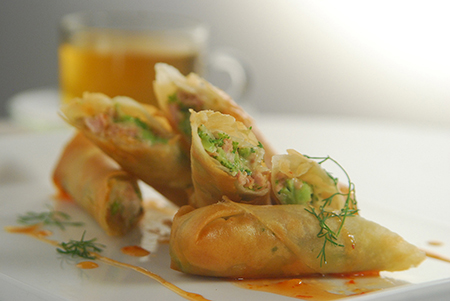 Animals, human and plants spring back into life as everything shakes off the dreariness of winter. In traditional ayurvedic teachings, this is referred to as ‘kauf’ (mucus) caused by the cold winter months – but also refers to the allergies many people suffer from during the plentiful season of spring.

In order to counteract the lethargic effect of ’kauf’, we should eat bitter foods – and these are plentiful during spring. Some such foods include fenugreek, pumpkin, parwal (pointed gourd) and spinach, along with fruits such as watermelon, raw mango, grapes and pineapple. All these foods come into season in March in India, and with April comes the addition of lady’s fingers, cucumber and jackfruit. May – traditionally the transition month between spring and summer – also brings papaya.

As you may have noticed, a number of these fruits and vegetables (watermelon, grapes and cucumber) are watery foods and therefore in keeping with the teaching of spring as a watery season.

But it’s not just whole foods that are considered seasonal – some spices are, too. Turmeric is considered the perfect spice for the spring season, as it revitalises the blood and encourages better circulation. It also helps to cleanse the liver from any residues of rich, fatty foods enjoyed during winter. Turmeric can also aid digestion, fight inflammation and generally leave you feeling fresh and ready for the coming season.

While the above fruits and vegetables can be found in numerous areas across India, turmeric is most commonly produced in Tamil Nadu, on the south-eastern coast.It is used in all different recipes – in warming curries and simple side dishes, vegetarian sides and non-vegetarian mains. The spice can also be used to make a restorative tea to help cleanse your internal organs.

If you fancy a taste of some traditional Indian spring dishes, but can’t make it across the continent, why not head to one of London’s top fine-dining Indian brasseries? At these elite eateries you’ll be treated to the finest and freshest fruit and vegetables from the country.