A server is a combination of software and hardware that responds to requests over a network.

A system dedicated to this purpose is often known as “the server,”

although systems often provide more than one type of network service. 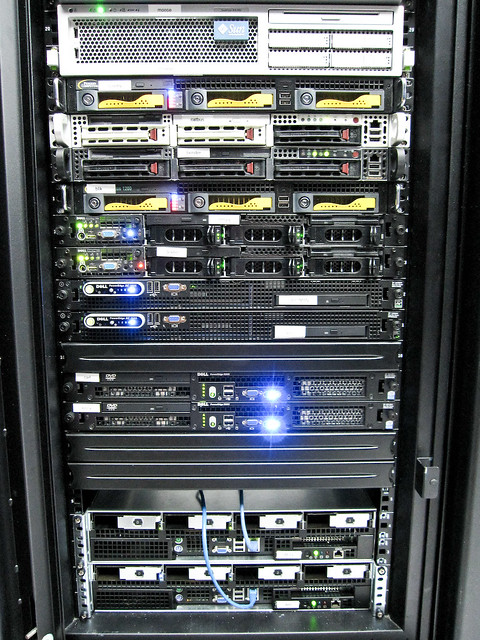 Servers have been in use since the mid-1960s,

but their uses have expanded significantly with the development of networks.

including the client-server model and the peer-to-peer model.

A server in the client-server model fulfills requests from other systems known as clients.

They usually connect to the server through the network, although clients may run on the same computer as the client.

The peer-to-peer model involves each system acting as a server or client as needed.

The client-server model is currently more common than the peer-to-peer model.

Servers in the 1960s were large machines that had to be monitored by specialized personnel known as operators.

Local Area Networks began to proliferate during this period, resulting in a greater need for dedicated servers.

Computers became smaller and easier to use, allowing them to be operated by end users by the 1980s.

The Internet began entering mainstream use by this time, causing the media industry to use servers for their distribution services.

Early examples of these servers include file servers with CD-ROM drives used to host databases.

The use of dedicated hardware and software to provide network services increased during the 1990s and 2000s.

This type of device is known as a server appliance, which includes gateways, routers and switches.

Examples of self-contained server appliances include the Cobalt Qube, the Google Search Appliance and the RaQ.

Modern operating systems are generally designed to run a variety of software, such that only low-level programs interact with hardware without an application programming interface.

Therefore, system designers often consider an OS to provide hardware to the software.

An OS generally has the ability to run services in the background, so PCs typically run large numbers of client and server applications simultaneously.

The most rapid development in servers has occurred during the last five years.

Many dedicated servers are now standard PCs that are loaded with specialized server software.

However, servers that provide heavy-duty networking services may still be computers specifically designed as servers.

The most common types of servers in a typical network environment include the following:

An application server runs a particular or suite of applications and makes it available to its clients.

A database server hosts a database and makes those services available to other computers or programs.

A file server allows other computers to remotely access files that reside on the server.

A game server typically hosts a network game and allows multiple players to interact with each other within the game.

A mail server receives e-mail for an entire organization and then forwards the mail to the individual recipients.

A print server allows clients to send print requests to one or more printers.

Server types that are less well-known include a catalog server, which provides a central point of access for information search is over a distributed network.

A proxy server is an intermediate server that process is service requests and towards those requests to another server.

A sound server provides multimedia broadcasting and streaming services for its clients.

Matt Smith is a Dell employee who writes to help raise awareness on the topic of servers and other network management subjects.

Understanding How Your Domain Name Can Affect Your Online Marketing

Think Out the Box: Benefits of Boardroom Automation