New York City is a thriving, diverse, and massively important place. Traditionally, its center has been Manhattan — but if you ask a tourist from Paris or London where they’re heading for their vacation, don’t be surprised if they say Brooklyn. As Manhattan has grown more expensive and less unique, Brooklyn has emerged as the beating cultural heart of the world’s greatest city, drawing tourists from far and wide — as well as more than a few visitors from other boroughs seeking a great place to have a beer or a meal. Here’s what you should do when you come to see Brooklyn for yourself.

Brooklyn is a big place. In fact, it was its own city until 1898, when it joined New York City along with other chunks of the city we know today. If Brooklyn were still its own city, its population of 2.6 million would make it our nation’s fourth-largest: bigger than all but (the rest of) New York City, Los Angeles, and Chicago (the last being virtually the same size).

Brooklyn is also large geographically so check out one of the AT&T stores in New York where they can suggest leveraging your mobile device for street and subway apps to help you get around. If you plan ahead and divide your visit to Brooklyn by neighborhood, you should be able to see many of the borough’s highlights without taking a lifetime to do so.  Be sure to check out Downtown Brooklyn (just across from the Brooklyn Bridge), Park Slope and other neighborhoods around Brooklyn’s beautiful Prospect Park, Williamsburg and Bushwick (Brooklyn’s hip cultural capitals), and Greenpoint (a quiet and beautiful neighborhood near Williamsburg). Further out in Brooklyn, you’ll find beaches and attractions on Coney Island, plus authentic and relatively tourist-free neighborhoods far too numerous to name.

Foodies will want to spend a lot of time in Brooklyn! The borough hosts a few of New York City’s most iconic pizzarias, including Grimaldi’s, sometimes considered the best. Right near Grimaldi’s under the Brooklyn Bridge is Juliana’s, which exists in the space originally occupied by Grimaldi’s and is preferred by some locals (you’ll have to taste both to develop your own opinion, though). Coney Island has Totonno’s, and Bushwick has relative newcomer, Roberta’s. 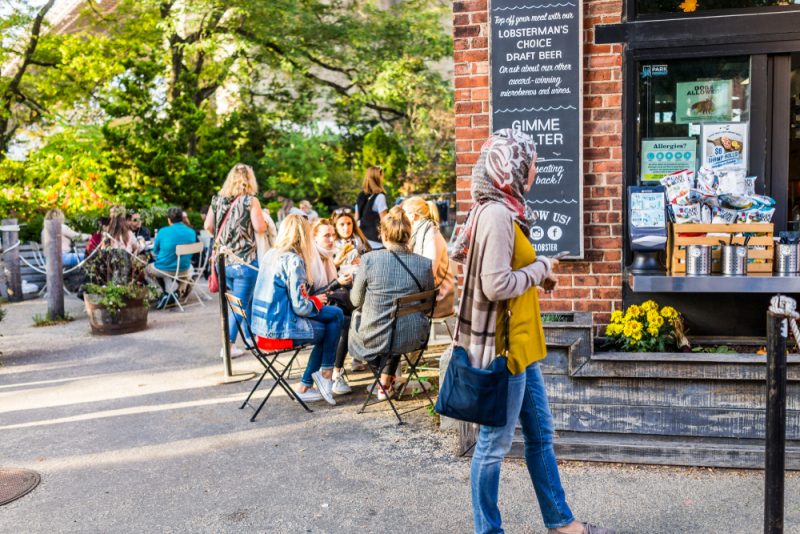 Williamsburg and Bushwick are full of great places to eat and drink. Brooklyn Brewery’s tasting room is here, as are restaurants like Barano and Aska. Elsewhere in Brooklyn, you’ll find a wealth of ethnic restaurants: if you name it, they have it in Brooklyn.

Brooklyn is full of cultural hotspots. Many of its museums can be found near Prospect Park. Also nearby are the Brooklyn Botanical Gardens and the borough’s large arena, the Barclay’s Center.

For indie music and other cutting-edge culture, head along the L train through Williamsburg and Bushwick. High rents have pushed many of the hippest concert spaces beyond Williamsburg, so be sure to get all the way out to in Bushwick, East Williamsburg, and Greenpoint, like Elsewhere and Brooklyn Steel.

Brooklyn is also a great place to pick up the latest styles. Trendy boutiques fill Williamsburg and Bushwick, while larger shops can be readily found in places like Downtown Brooklyn. Brooklyn even has its own mall in Atlantic Terminal (it’s actually one of five different malls in the borough). But the real fun is exploring the local shops that call Brooklyn home, from the recently opened ones to the neighborhood classics. Be sure to peruse thrift shops and second-hand stores, too, if only to take in a little bit of Brooklyn’s rich yet unassuming history.

Protect Yourself and Your Belongings

Beautiful Destiny In Solo City You Should Visit

The Best Art Museums In Tuscany