The ancient walled village of Yvoire is a beautiful location for a day trip excursion, with ferry’s running frequently across Lake Geneva from Nyon and other parts of the Swiss side of the lake. It is ideal for a continuation of your Geneva airport transfers, which run all the way along the shore from Switzerland’s second most populated city.

Your short ferry cruise allows you to soak up the breathtaking sights both sides of this historic wonderland, mooring at Lake Geneva’s most highly prized asset, Yvoire. Some consider this village an undiscovered gem, with its powerfully imposing 700year old castle jutting out towards the water from its rock face.

Inside the fortified walls, built around 1306 in an attempt to secure the military strength of the location (situated, as Count Armedee V the Great saw it, strategically in between the ‘large’ and ‘small’ sides of the famous lake), you’ll find marvellous winding cobbled streets filled with mostly French holidaymakers in the summer and vacationing ghosts in the winter. It is wonderfully quiet when the nights draw in, which is a handy tip for those looking for somewhere authentic and tourist-free. 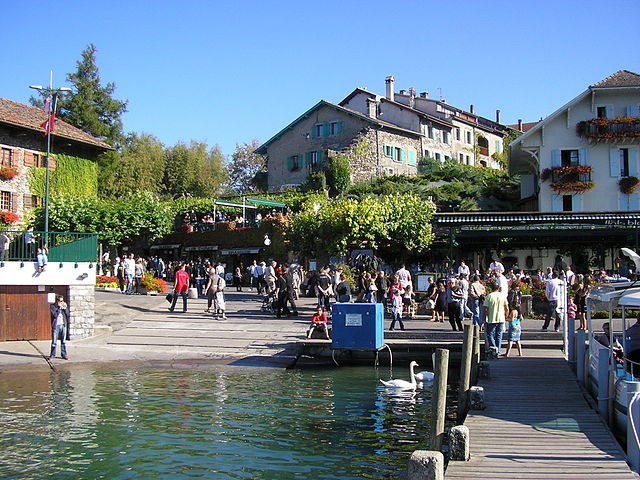 All around the village are remnants of centuries past with old stone walls, gateways, ramparts and moats all preserved fantastically to give history and architecture lovers a glimpse into what life was like in the 14th century.

The castle, despite unfortunately not being publically accessible due to its private residency, still captures the essence of the village and evokes a feeling of wonder in all who gaze upon it. The building has had a sketchy history to say the least, spending 350 years of its life roofless and desolate following a fire, but it is still a glorious sight and worth making the diversion when you arrive on your Geneva airport transfers.

St Pancras’ church is another tourist haven. Dating back to the eleventh century, its ‘onion-shaped’ tower contains a fantastically grand steel bell. Despite many regenerative projects, the old church retains its appealing Middle Age feel with its religious architecture characteristic of Savoyard and Piemontese influence.

You will notice too that everywhere you pass in Yvoire is decorated with flowers. The entire village is like a permanent Chelsea flower show, with bright colours and lush greens at every corner. It is also home to the Garden of Five Senses which, with its moulded arched hedge passageways and eclectic assortment of colourful flowers is a must see, and notably marked down as a ‘Remarkable garden’ by the Ministry of Culture no less.

For a truly romantic journey back in time, the medieval stronghold village of Yvoire is a great choice and, thronging with tourists in summer and eerily calm and enchanting in winter, it makes for a memorable day trip that is perfectly accessible by means of your Geneva airport transfers.

Possible Quick Trips That You Can Take from Chandigarh

What to take on a bareboat sailing trip in the Caribbean

Tired Of The Cold? 4 Reasons Florida Is Your Perfect Seasonal Vacation Destination