If any city, in any country, is equipped to entertain any kind of travellers whatsoever, then it is surely New York. Whatever you want from a holiday you can indulge in it here – even chillaxing on the beach, surprisingly. Gorgeous Far Rockaway beach is only a short train ride out of town and on a summer weekday surprisingly empty.

Two years ago I found myself single, between jobs and with a burning desire to get away for a little while. Once I had secured a new position, I decided before starting it that I would spend some of my redundancy package on treating myself to a holiday, and New York City was the first place on my mind. Here’s how I spent my time there. 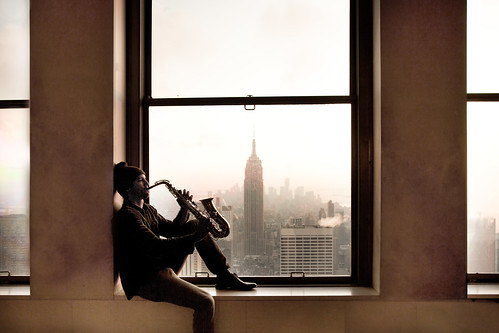 I landed at JFK around noon, and after I got a yellow cab into Manhattan where I dumped my bag, I grabbed a falafel from a street vendor and went straight to the Empire State Building. It was a clear day and the views from the summit were incredible – panoramic vistas of the world’s most exciting city, pinpricked on all sides by gigantic skyscrapers. As well as taking loads of photos, I used the opportunity to acquaint myself with the city layout – New York’s streets are in a grid layout, so once I had established where my hotel was it was easy to see where else I could easily get to.

Taking a Stroll in the Country

Well, almost. While researching my trip the thing that I wanted to do most of all was walk along the Highline, which is a short section of elevated railroad track above Manhattan. It was repurposed a few years ago as a public park, and is now populated by thriving vegetation and lots of benches to sit and watch the world go by. I only spent a couple of hours up there but it was easily one of the most memorable parts of my New York holiday.

This is a city, and a country even, that was built on the labour of millions of immigrants. The Statue of Liberty is a symbol of welcome to the oppressed and needy, and they came by the boatload, making New York a hubbub of cultures, dialects and histories. I think this is why it has become the greatest city in the world – nowhere else do you have this huge melting-pot of ideas. So I spent an afternoon on Ellis Island at the museum there, reading through the stories of real-life immigrants.

I’m a big movie buff, so I decided to visit some of the locations where my favourite films and tv shows were shot. The whole city is covered in them, from the Ghostbusters fire station to the Daily News Building on East 42nd Street which appeared in Superman. I could have joined an organised tour too had I felt like it. The great thing about holidays for singles is you can spend a day doing this kind of thing, such as photographing nondescript old buildings which mean a lot to you, but may not interest your partner or friends or such.

Of course you can’t visit New York, or I certainly couldn’t, without seeing the nightlife. Having by now met up with a few likeminded folk, we enjoyed late-night coffees in Greenwich Village before cabbing it to the Meatpacking District where we partied til the early hours. It was so much fun we ended up doing it again the next night too!

Nowadays I take singles holidays all the time, sometimes structured through a tour company, sometimes just long weekends in Europe, and I honestly think it’s the best form of travel there is.

Travel To ‘Escape Rooms’ Around The U.S.

Sao Paulo – The Paris Of The South