Distinguishing between Client and Server Computing

A server is simply a computer that other computers connect to, while client computers are computers that connect to a server. Small businesses usually rely on client computing. A bookkeeper may load accounting software on his or her personal computer and use it there, while the receptionist might have a document suite on a computer. Having a client computing infrastructure does not necessarily mean that there is no server involved. In this example, documents could still be stored on a server but each employee would still be computing at his or her own desk.

Server-based computing differs in that applications are actually run on the server itself. A company can have a single server that all employee computers link to. The server also need not be on the actual premises of the business. In cloud-based computing, rather than connect to a single server, the company connects to a cluster of servers—all of which have resources available for the company’s use. Many cloud platforms run on dedicated cloud operating systems, but more companies are now offering Windows cloud hosting, allowing businesses to switch from their dedicated Windows servers to the cloud without the hassle of completely switching applications. 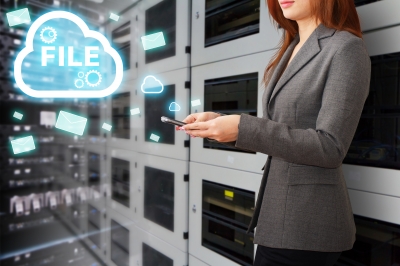 The benefits of Server-based Computing

Centralization of applications on a server simplifies the overall maintenance, upgrade and troubleshooting of an IT system. It’s ideal for companies that want to streamline their services, lower their IT costs and still provide room for growth. Cloud-based servers have even more extensive benefits to this end. Companies that have a server-based architecture can concentrate on the server’s technology rather than the technology running on their client computers.

Cloud-based servers facilitate growth and scalability. The elastic nature of the cloud means that the system can contract and expand as is required, allowing for variable resources through periods of increased traffic. Further, servers allow clients to take advantage of technology and resources that would be far beyond their client computers.

Both cloud computing and in-house servers can be used for the purposes of server-based computing, and each has its own pros and cons. An in-house server remains under direct control of the company and many businesses believe that in-house servers are more secure than cloud servers. However, dedicated servers usually can’t offer the amount of resources that a cloud server can. Cloud servers are usually less expensive than in-house servers, more powerful and more accessible. Companies that have a very limited budget may shift to a dedicated server due to its reduced cost overall, while companies that are looking forward to growth would likely want a more scalable solution.

Whether a company chooses between an in-house server and a cloud platform, it is clear that server-based computing is the way of the future. Centralization on a server is essential for those that want to build their company and maintain their IT infrastructure in a sensible, accessible and scalable fashion.

7 iPhone App Development Tips You Should Keep In Mind

How Web Designers Should Build a Presence in Twitter?

6 Identity Traits A Great Logo Design Can Offer Your Business