With the developing popularity of Blu-ray movies around the world, the demand for a proper Blu-ray media player shows a strong trend to rise. Currently in the market, a quality qualified Blu-ray player software is of great help for many computer owners who would like to watch Blu-ray movies with their computer, especially since Microsoft unemployed DVD playback in its Windows 8 OS. Leawo Blu-ray Player is just such kind of Windows Blu-ray player software to help movie fans play Blu-ray movies on computer easily, only with the precondition of a built-in Blu-ray drive on computer. 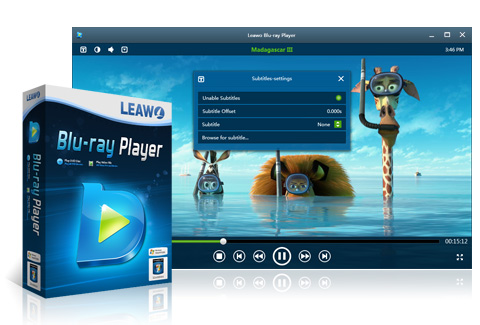 As a professional Windows Blu-ray playback software program, Leawo Blu-ray Player no doubt provides professional solutions for people to play back Blu-ray discs and folders on computer without quality loss. In a nutshell, Leawo Blu-ray Player is in fact a media player combo that not only plays Blu-ray movie on computer, but also plays DVD movies, videos (1080P HD video included) and audios for people to get cinematic movie experience at home. Currently, Leawo Blu-ray Player is available in multiple languages, including Dutch, English, French, Italian, Polish, Portuguese, Portuguese (Brazil), Spanish and Vietnamese.

Another shinning spot of Leawo Blu-ray Player is its permanent free service for playing back DVD movies, videos and audios with no quality loss. No matter the source DVD discs are commercial or noncommercial discs, the source videos are common or up to 1080P full HD movies, the source audios are stored in local music library like iTunes music library or from online sources like YouTube or Facebook, Leawo Blu-ray Player provides lifelong free service to play them back.

The audio output of Leawo Blu-ray Player is highly praised due to its support of DTS-HD Master Audio and DTS-5.1 Audio playback, which could guarantee super high quality of stereo audio output for people to enjoy audio better.

The interface of Leawo Blu-ray Player is a typically easy to use, which provides full navigation for people to load source video, Blu-ray, DVD or audio for playback. For users’ convenience, it even allows people to directly drag and drop source videos and audios for playback. The interface is very clean and tidy, no tech knowledge is needed for operating.

Processor: 1 GHz or above Intel/AMD Processor

Tips You Should Follow To Pass The Theory Driving Test Easily!

How Quality Is Related To Failure: Latest Industry Developments