Defaulting on a student loan in the United States can have a number of negative consequences and can adversely affect your credit for many years. Default typically occurs when a loan receives no payment for 270 days. It leaves on repayment status and is due in fall when the lender requests. Add new collection costs to the balance of loan making it more drastic and expensive than before. Some would argue that it can be eliminated through negotiation or legal action but that too also requires spending. 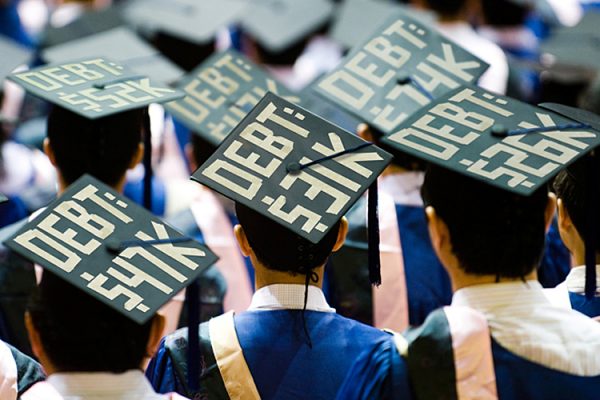 A defaulted student loan can bring a lot of negative consequences. A student who wishes to return to school cannot qualify for federal aid in United States until satisfactory payment arrangements are made on the defaulted loan. The unpaid loan can also be rehabilitated but that process can take almost a full-year of on-time payments.

Bankruptcy is not the way to go

Proper advice and counseling should be the way to go for individuals who are unable to service their student loans. There are so many other options available other than payment in full for American students. Out of those bankruptcy nowadays is not a valid option and should not be used. The Bankruptcy Abuse Prevention and the Consumer Protection Act makes discharging loans through bankruptcy virtually impossible. This lack of bankruptcy protection for consumers results in a risk-free loan for creditors, removing pressure on creditors to negotiate lower payments.

There is continuous disagreement among the private student lenders and a federal regulator over the proper statistics to gauge repayment problems in the loan market. Lenders argue that the private sector has a better track record of student –loan performance making it an ongoing debate of late. Among all the concerns about increasing levels of student debt and the level of high default, the Consumer Banker Association, a trade group of lenders have quoted come astonishing figures of only 3% of private student loans are seriously delinquent. This data has been cited from Measure One, a San Francisco- based firm that has a reputation in tracking student loan market. In contrast the U.S. Department of Education which is responsible for federal loans which constitute about 92% of the loan balances has reported figures in double digit. One cannot arrive at a firm conclusion by looking at the above figures as they are based on different methodologies.

Whether a Co-signer could be of Any Help?

Cosigning a loan is another important factor that needs to be taken into account. A large share of federal loans is taken out by borrower alone whereas many private loans are co-signed by someone else, generally by a parent. These lenders get paid on time because parents usually tend to step in to make payments that their recently graduated child couldn’t handle. There are Federal Plus loans which are alone signed by parents to finance their child’s education.

These figures either of the Education Department’s or of Private student loan lenders thoroughly represent the borrower’s loss and difficulty in repayment. For federal loans, the Education Department tracks how many borrowers’ default on loan payments over a period of three years after they start paying back the loan. It actually calculates debt of those borrowers who have gone without making any payment for the past 360 days. The borrowers who started paying during 2011, 13.7% have defaulted within three years which is down from 2010 (14.7%) and up from 2008(12.2%).

Private lenders have their own methodology of tracking the borrowers down. They calculate the share of balances on which the borrowers have fallen behind and also the share of balances they write off as a loss once they don’t receive payments for months on end and the lender no longer expects to get repaid. To deal with those debts there are collection agencies who buy those debts and later on pursue debtors in different ways. According to the latest data collected by Measure One, borrowers were 30 to 89 days late with payments on 2.97% of private student loan balances as at march 31st which was down from prior year having the same figure at 3.59%and were 90 days or more delinquent on 2.55% of private-loan balances as of March 31, down from 5.72% as of mid-2009. These delinquency figures don’t reflect the loans that private lenders have already written off as hopeless.

In addition, the New York Fed says that the actual delinquency rates are likely worse than these figures show. That is simply because half of student loans are currently in grace period, deferment or forbearance and in those periods borrowers are not required to make payments although interest constantly accrues.

Back To School: How You Can Save On Costs For Clothes, Supplies and More

THIS IS HOW ONE SUCCEEDS