At church you can witness to all sorts of humorous situations. I don’t want to sound mean or malicious, but for some going to church every Sunday can be the highlight of the week. Instead of being focused on the Holy Words, some people go to church just to be put to date with the weekly gossip or to check out funny pics on their smart-phones.

However, most people go to church to ask for forgiveness and to pray for their family. We all know that what we say to the priest during confession remains a secret, so we have no reason to lie about our actions. However, this secret can be brought to light under certain circumstances. I remember a story my grandmother once told me about how the secret of confession was revealed. It was quite a hilarious story, as far as I’m concerned. 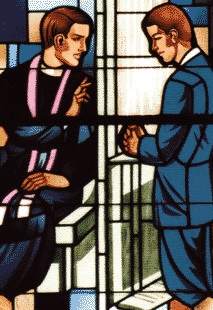 Well, the story is about the day a priest left his parish, where he served God for many years. Besides the traditional goodbye dinner, the congregation members thought to give the priest a present. So they invited a local politician to say a few words and to hand out the gift. Like all statesmen, he came in late, so the priest thought to say a few words.

He said that he made up his first impression about the congregation after he heard his first confession there. He thought he was sent to a terrible place because the man he confessed said he stole a TV and money from his parents and also that he stole money from work, besides having a sexual affair with the boss’s wife. The man also said that occasionally he was involved in drug trafficking. At the end of his confession, he told the priest that he gave his sister a sexually transmitted disease. The priest was stunned and very scared of what he heard! However, in time he realized the community was nothing like that guy. In fact, he realized the parish was formed by responsible and loyal people with moral values. At the end of his speech, the priest thanked everyone for being so kind to him all those years.
In the meantime, the politician arrived, so he was asked to speak. After he apologized for the delay, he began as follows:

“I never forgot the day our priest came to our parish. In fact, I had the honor to be the first to confess to him”.

Everyone burst out laughing. Of course the situation was not at all hilarious or even funny for the politician, but it was for everyone else.