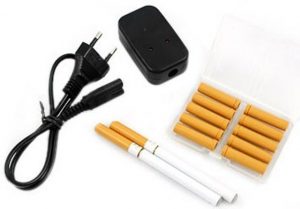 E-cigarettes or electronic cigarettes are battery charged devices that mimic the use of a cigarette. Users inhale vapours instead of the usual smoke. It can be used time and again unlike its disposable counterpart – the tobacco cigarettes.

The electronic cigarette that used nicotine was patented by Hon Lik, a Chinese pharmacist in 2003.

It is a smoke free cigarette because it does not use tobacco. It uses a flouring liquid instead. This liquid is heated to be inhales by the user as vapour.

Electronic cigarette flavouring liquids, or e-liquids as they are better know, contain various amounts of nicotine ranging from ones with almost no nicotine content to those that contain nicotine levels similar to that of tobacco cigarettes.

Electronic cigarettes are often and usually sold as a kit. A basic kit will contain the cigarette body, a rechargeable battery, an atomizer, an LED light, flavouring liquid samples. There are more highly detailed kits for e-cigarette enthusiasts.  For those who are new to e-cigarettes, electronic cigarette starter kits are the best choice.

Electronic cigarettes cater to a large audience by offering a large variety of flavours. Some of the popular and easily available e-cigarette flavours are Tobacco, Menthol, Cola, Cherry, Strawberry, Apple, Blueberry, Banana and more.

Electronic cigarettes can either be bought from brick and mortar stores or from online stores.

This is currently a much debated topic. The absence of tobacco in the e-cigarette makes it a healthier version of the regular tobacco cigarette. Some electronic versions also let the user determine the level of nicotine they want to take in. If the level of nicotine is gradually reduced, it may help many to quit smoking.

These are just a handful of FAQs or frequently asked questions to give you a general idea about e-cigarettes and electronic cigarette starter kits. If you have any doubts, or would like to ask any questions, or have anything to add to the FAQs, please leave us a comment in the section below.

A Look At Load Balancing For Developers

“Home On App” – Makes It Easy For Job and Home Seekers

Things To Consider Before Working With Web Developers