Like another challenging game 10, Ever Up is also a challenging yet simple number-focused puzzle game which requires moving modules.

Anyway, though it is similar with 10, Ever Up still has its own unique style. Although there are many numbers in the game interface, there is no need to do mathematics. Players only have to match up corresponding numbers. And the goal is to leave only one number on the board. There is one thing that should be clear is that the tiles can only slide left or right once. They cannot be slide diagonally. It is easy to level up at the initial states of the game, but things will turn to be more and more challenging. 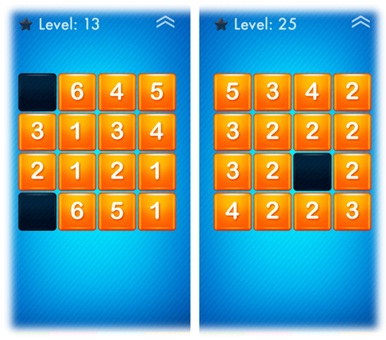 Most players can make good performance at the initial levels. But further on, with the levels increase in number, the game get more difficult. Even in some levels there is only one gap left but plenty of tiles need to be manipulated. Therefore, careful and detailed planning is needed. Well, fortunately, there is an undo button built in the game, without limit of use.

In the game, there is no time limit as well as “star” limit to restrict the players. Players can obtain one star each time when they complete one level. These stars are very useful because they are the key to unlock the next even harder stages. Of course, the Game Center will update the game information in real time, but this may be not so important to some players. 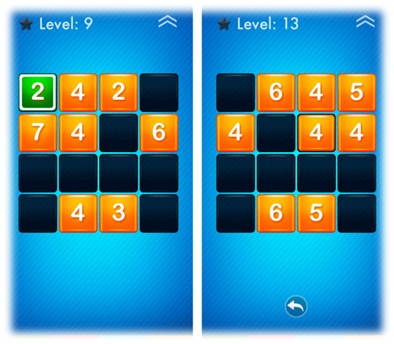 Although Ever Up requires players to use the head, it can also relax players mentally and physically. Players can relax in the game while get a sense of achievement after level up. Well, the game looks very simplistic. However, just like 10, this is a game that looks simple but challenging and even addictive.

So far, the newest Ever Up can be downloaded from App Store with $0.99. It is compatible with iPhone, iPad and iPod Touch, requiring iOS 5.1 or later.

Warm Tips for Gamers:
Here we would like to give you tips on play flash swf games which are wide spread on the internet. SWF games are not supported by other devices offline unless flash player is installed. Anyway, you can still play downloaded swf games on our Android or Apple devices without support of Adobe Flash. All you need to do is to convert SWF to proper file formats that are compatible with your devices. To achieve the conversion, you might need the
iOrgSoft Win or Mac SWF Converter which is capable of converting SWF to MP4 Mac, SWF to WMV, SWF to H.264, Mac SWF to AVI, etc. It supports a lot of file formats among which you will get the right one for you device.

American Idol – Boys Are Outnumbered By Girls, Chances Are Bleak For Boys