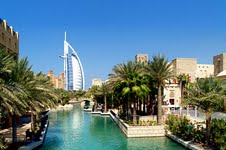 United Arab Emirates or UAE is a conglomerate of seven emirates. Dubai belongs to UAE. The population of Dubai is 2,106,177 which is the highest in UAE. The land territory is 4114 sq. Km, which is second largest in UAE. Dubai is a cosmopolitan global city and is steadily growing in business. It is a business and cultural hub of the UAE and the Persian Gulf region. It is a westernised city mainly depended on oil industry. Recently it has attracted world attention by building many extraordinary sky scrapers and sports complex. Burj Khalifa is the world’s tallest sky scraper. Dubai is a very expensive city and is rated as the best place to live in the Middle East.

Arabic is the national language of Dubai Atlantis. English is considered as the second language. Many languages are spoken in Dubai as the work force is mainly drawn from the South East Asia. People from India, Bangladesh, Filipino, Pakistan, Somalia etc are found in Dubai. The culture of Dubai is truely cosmopolitan.

Dubai has a free trade in gold and was a hub of gold smuggling to India. Jebel port is the largest man made harbour in the world. Many IT giants have their establishment in Dubai, like Hewlett- Packard, EMC Corporation, Oracle Corporation, Microsoft, IBM. Real Estate Development Projects Have lead the construction of Emirates Tower, Burj Khalifa, Palm Island where Atlantis Palm Hotel is situated, Burj Al Arab hotel etc.

On the Valentine’s day 2013 a 72000 Sq km miracle garden is opened in Dubailand. This is the world’s largest natural flower garden. It is yet to be fully complete. When completed, it will have 45 million flowers. The waste water will be re-used through drip irrigation technique.

Writer works for a travel company and travelling is also his hobby. He loves to visit new places and meet different people.

Booking Long Term Accommodation For Your Next Business Trip