Those with even a passing interest in fine tobacco have heard of the quality of Cuban cigars. Aficionados throughout the world have sung the praises of this small island nation’s chief export for years. Long before a U.S./Cuba embargo was a thought in anyone’s mind, these cigars were wanted and desired.

Winston Churchill made the Romeo y Julieta variety famous, as photographers rarely snapped him without the ubiquitous stogie clenched between his teeth. And in 1961, with the aforementioned embargo looming, John F. Kennedy sent his press secretary on a mission to Cuba with the express purpose of acquiring 1200 Petit H. Upmann cigars. Trade or no trade, Kennedy wasn’t about to give up his Cubans.

But are Cuban cigars truly the best in the world, as some tobacco connoisseurs might suggest? The truth is it depends on whom you ask, as well as a great deal on personal taste. In actuality, many cigar aficionados will tell you that, these days, the cigars produced in places such as Honduras and Nicaragua are of higher quality than those coming from Cuba. But if that is indeed the case, it has quite a bit to do with the fact that Cubans work in the factories in these countries implementing their homeland’s long-cherished hand-rolling techniques.

And it’s the combination of these practiced artisan manufacturing methods as well as general climate conditions that earn Cuban cigars the distinction of being some of the finest in the world. 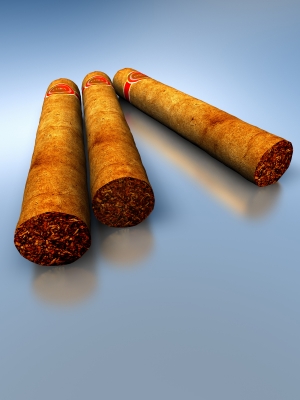 Cuba manufactures over 40 different brands of cigar that all vary in price but all of which have a good minimum quality. That means, at worst, any Cuban is going to have a smooth draw – something that is very important to the typical connoisseur. Take for example Habanos, S.A, Cuba’s largest cigar-manufacturing monopoly. They roll 27 high-end brands, such as Romeo y Juleita, Montecristo and Cohiba, available in 220 sizes ranging in length from 4-10 inches. That’s quite a few options for a good smoke.

Typically, Cuban cigars are made using five different types of tobacco, all dried in fincas, or outside huts. The outer leaves of the tobacco plant receive the most sunlight, and thus have the strongest flavor. These leaves are used as the filler for a typical cigar with the inner leaves providing the binding, or wrapper, that holds the cigar together. Part of the reason Cuban cigars enjoy a reputation as some of the finest around is because the tobacco selection process is so exact.

Those who have read up on these cigars have likely heard the Pinar del Rio province of Cuba mentioned in conjunction with tobacco growing. That’s because with a year-round temperature of 75 degrees and 65 percent humidity, this area of the country is ideal for tobacco production. There is even a small sand content in the red earth that facilitates the growing of the leaves.

All tobacco leaves used in Cuban cigars are fermented at least twice (some three times) and aged for months or years until such time as they are ready to be rolled. In the Cohiba factory – a converted mansion in Havana – 25,000 cigars are produced daily, all rolled by hand without imperfections. Indeed, the process is so demanding that potential rollers must pass a nine-month course before they can begin work.

It’s this level of care, attention to detail, and respect for tradition that has helped the Cuban cigar become the dominant force in the tobacco market that it is today. And while reasonable cigar aficionados can disagree on the merits of Cubans compared with other varieties from other countries, one incontrovertible fact remains: Cuban cigars have more than earned their stellar reputation.

Jason Rose is a professional blogger that provides the latest news on premium tobacco products. He writes for Gotham Cigars, a leading retailer of cigars online.

The Hottest Mens Fashion Boots For Spring And Summer

3 Simple Steps To Follow While Selecting Your Wedding Flowers