With the development in the world of science and technology there are a number of machines invented. Some of them are also used in the world of medical science and CPM is one of such machines. The CPM stands for continuous passive motion and the primary function of this machine is to provide passive movement to the body part in a range of moves only. It is used in some critical situations where the full movement to that body part cannot be permitted but partial movement is also must for faster healing. 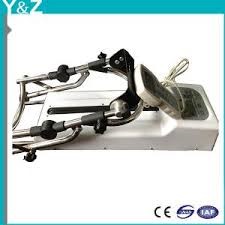 This device is particularly used in the primary phase of a rehabilitation that can be after a surgery or a trauma. The primary objectives of using CPM Medical Equipment are reduce the pain after the operation, keep a check on inflammation and reduce it, provide little movement to the concerned body area as full movement can be risky or not in the interest of the patient after following the operation, protect the tissue and help it repair quickly. This is a particularly designed device that provides constant move to the body part in a limited span motion. The movement and speed as well as span of movement can be decided by the expert, who implants this device. However, in majority of the cases the movement is increased with the time.

When the CPM is used?

There are some medical conditions when this device is recommended and used. It is primarily used after operation of knee replacement as well as ACL reconstruction. However, the mechanism of this device depends on the kind of surgery performed on the patient. One of the mechanism is there that can help the joint to recover and provide supportive diffusion of nutrients to the cartilage that is damaged. Another mechanism is there that can prevent the tissue formation in the nature of fibrous scar within the joint that gradually decrease the movement of the joint.

There are many misconception of the use of CPM also. There are many surveys done on the use of CPM and many of these surveys are also believed as paid surveys just to keep the uses of these devices in the market. The rehabilitation after the operation the joints need to have a little movement but to the fullest extent. Hence, the CPM device is useful to offer such limited movements and not faster movements so that the joint can have all the tissues and muscles rightly healed. It is a device proven much helpful to get the relief from pain. This is a device that must be used under the guidance of expert doctors only. There are many brands and companies in the market that offer such devices but one has to take decision cautiously ad compare a number of factors to have a right decision. You can ask your doctor or other medical professional as well as do some research on the internet also that can help you to understand the effects and other factors of the CPM device.

4 Reasons You Absolutely Should Not Tackle Withdrawals Alone

Being Prepared For When An Asthma Attack Strikes