Alishia Martin had just finished an evening walk with her dog and had safely entered her home, when she and her family heard the horrific sounds of a multi-vehicle car accident on the highway, in front of their home.  Examining the photos from the crash, showing a crumpled and mangled vehicle just feet from her door, Martin should consider herself very lucky.  Had she returned home moments later, she would have been struck and either severely injured or killed by the out-of-control vehicle.  While police speculate the driver responsible for the multiple vehicle accident, all possibilities and accounts must be considered before formally pressing charges.  Some accidents, only involving one or two cars, can be complex, but once three or more vehicles are involved it can become difficult to determine who is at fault for the chain reaction type accident. 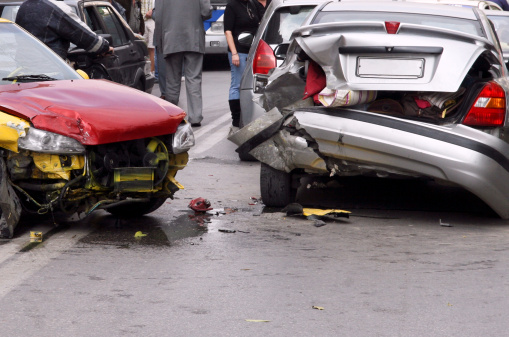 What is a Multi-Vehicle Accident?

Most of us, when we imagine a multiple car accident, think of a long mass of mangled cars lined up on a highway; all due to one lone driver causing a tragic chain reaction or maybe we envision an epic action movie scene where the hero chases down the criminal via a top speed car, causing multiple accidents.  Multiple vehicle accidents, involving at least 3 vehicles, are typically categorized as three types of accidents:

A head-on accident usually involves a driver crossing over the center line, striking other vehicles in the path or navigating the wrong way down a one-way street.  One head-on collision can cause secondary collisions, and so on.

This type of accident seems to be the “classic” multiple vehicle accident.  A driver may be stopped at a stoplight; the distracted driver behind him may not see the idled car and rear end the driver, causing a chain reaction.

This type of collision, which is initiated by a vehicle hitting another vehicle traveling perpendicular, may cause additional collisions when the “hit” car spins out of control and strikes other cars.

A single accident can turn into a multiple car accident without warning and for the same reasons that other car accidents occur.  According to the U.S. Department of Transportation, the most frequent factors involved in causing an accident include, but are not limited to:

A traffic control represents any signage or indicator that “tells” drivers what to do, from stop signs to traffic lights.  Wherever signage exists, the chance of a crash occurring increases.

You’ll notice when you hit the freeway, you can drive faster than when you drive through residential neighborhoods or even smaller highway systems.  When speed limits change, signage is present.  Remember, where signage exists…danger increases.

Roadways are intricate and fascinating.  Take a look at a map and they seem to mimic the veins flowing through our bodies.  Some roads are straight, flat, and feel like a never ending stretch in relatively “flat” states like North Dakota while other roadways curve dangerously, seemingly perched and carved into a mountain in Colorado.  A curvy road does not automatically make it more dangerous, but head-on collisions may be more prevalent.

Accident investigators always look at weather as a factor.  Was it sunny, blinding the driver?  Was it rainy, snowy, or foggy, making roadways slick?  Was visibility an issue?  The possibility of an accident increases when the weather is poor.

Humans and their driving habits and behaviors are always a factor in a crash, even if one driver is not responsible.  Think of your own driving.  Are you a good defensive driver?  Do you think quickly and act safely when you face danger on the road?  Are you distracted or do you drive under the influence?  Are you a model driver or a bully on the road?

Chances are, accidents don’t just happen; there are always multiple factors to consider.

Trying to determine who is at fault, when dealing with a multiple car accident, is not the easiest task.  There is rarely a clear division of assigning fault percentages, especially when more than 2 cars are involved.  Take the Sheppey Crossing multiple vehicle pileup in early September.  Over 130 vehicles were involved in rear-end chain reaction, leaving cars colliding for approximately 10 minutes non-stop.  The fog covered roadway was the main culprit for numerous injuries and cars, trucks, and buses crumpled up into one another.  Motorists were quick to try to stop other drivers, unaware of the destruction yards ahead, from entering the accident site.  Some drivers stopped in time, resulting in drivers running in to them.  Looking at this case, it would be almost impossible to blame one driver for the pileup.  And what if you were located in the center of the pileup?  Would you legally be able to charge each and every driver who rear ended you (think over 50 drivers!)?

There is no clear answer to legally decide who should take the blame and fault percentages vary from state to state.  If you are involved in a multi-vehicle accident, gather as much information as you can, try to stay out of harm’s way, and find legal representation.  Your vehicle was most likely damaged and you may have suffered injuries.  Filing a report with just your insurance company, alone, may not get you the compensation you deserve and expect.  Would you rather face an army of angry drivers alone or have a skilled accident attorney help you get through an otherwise terrifying experience?

The Most Common 5 Things That Cause Windshields To Crack