Costume parties are tons of fun, and it’s great to get into the spirit of things. It can be really enjoyable to come up with your most creative costume and activity ideas. However, there are certain things that you should definitely avoid. From spending too much on a costume to dressing in an outfit that no one will understand, these tips will keep you safe from party embarrassment.  Here are 6 big things to avoid when attending a costume party.

Don’t Use Your Costume as an Excuse 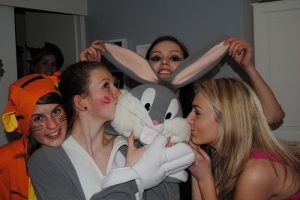 When you’re all dressed up, you’re under the cloak of darkness, not to mention the cloak of your costume. Maybe it seems like a good idea to egg your ex’s house or pull some other mischievous prank. It’s not. Just because you’re wearing a costume, that doesn’t mean you can just do things with impunity. There are consequences to your actions, and if you get too carried away, you might be calling someone to bail you out of the slammer.

Avoid Dressing as an Esoteric Concept

Don’t be incredibly abstract with your costume; unfortunately, people just won’t get it. Dressing as something conceptual like “post-modern literature” means your friends and fellow partygoers will ask you to explain yourself all night long.

It’s a surefire way to have people constantly approaching you in confusion and then engaging in conversation. Of course, if that’s your goal, then go for it. But keep in mind that explaining that your costume is the Higgs Boson particle will probably get old by the millionth time someone compels you to do it.

Say “No” to Spending Tons of Money

It’s pointless, and you’re not impressing anyone. The great thing about costume parties is that you get to step out of yourself and into character for a few hours. Of course, this means that your costume is most likely disposable — you’ll only wear it a few hours in your life. It’s much more fun, not to mention practical, to buy something inexpensive or exercise your creativity in putting something together.

So many people fall into this trap on Halloween and at costume parties. Just because you like the idea of a costume, that doesn’t mean you should forego finding a size that fits. Too small or too big costumes are just asking for a disaster while you dance and party. Fortunately, it’s easy to buy something that works for you. There are plus size costumes and smaller costumes available for all kinds of costume concepts.

This is a big one if you’re hosting your own party. No one wants to go to a party, especially a Halloween party, and see a spread that’s bereft of the requisite sweets. Even if only for a few hours, get into the spirit of things with proper snacks. Otherwise you’re looking for pranks from the people who get the proverbial fruit or toothbrush in their trick-or-treat bags.

It doesn’t matter what costume you’re wearing. Although bobbing for apples is a game that always seems to pop up at costume parties, especially if it’s Halloween, there’s one word you should keep in mind when you feel the urge to join in: saliva. Unless you’re first to bob, there’s tons of other people’s spit in there along with those apples. It doesn’t matter what superhero you’re dressed as. There still will be spit.

There are some things you should just avoid at a costume party. Get in the spirit of the evening and have lots of fun, but remember what not to do.

Miss (or Mr.) Independent: 4 Ways to Be More Self-Reliant