The biggest single use of coal within the steel industry is as a blast furnace fuel, either for injection together with the hot blast, or for the producing metallurgical coke. Other uses of steel production coal that are less commonly thought  include making electricity and steam, as a source of carbon addition in the processes of making steel, as well as in direct smelting of an iron process. Electricity bought from outside sources is mainly generated from combustion of pulverized coal, hence having an indirect influence on operations of steel making.  Here is a look at the various uses of coal in a steel plant.

Production of coke is done through heating particular coals of very specific properties with no oxygen in a refractory oven to about 2000F. As temperature rises inside the coal mass, it becomes plastic or melts, fusing together as devolatilization takes place, ultimately resolidifying and condensing into large enough particles for use in a blast furnace. In the course of this process, much of the oxygen, hydrogen, sulfur and nitrogen are released as volatile by-products, leaving behind a carbon product that is porous and poorly crystalline. The properties and quality of the resulting coke is almost similar to the selected coals, together with how they are carbonized and handled in operations of a coke plant. 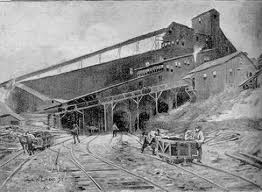 Carbon from either tuyere-level injectants or coke, such as natural gas, coal, oil or tar can be utilized in the blast furnace’s raceway zone. It can be used to generate some of the reducing gases and energy required for reducing iron oxides, produce molten slag and metal, and preheat the burden. U.S. Steel Corporation in the 1960s started evaluating the technological feasibility for injecting pulverized coal into the blast furnace as a way of reducing costs of hot metal and coke rate.

Coal injection systems generally consist of grinding mills that are capable of reducing and drying the raw coal in a single step to a range that is particle-size acceptable for injection and distribution. The waste gases from the furnace can be utilized in drying operations so as to reduce costs, together with the use of natural gas systems. Additionally, an atmosphere that is inert should be employed in order to mitigate the potential for explosions of dry coal particles and fires. A wide range of non-cooking coals have undergone testing for injection, ranging from anthracites to bituminous and lignite coals.

Improvements in practices of steel making through the incorporation of continuous casting technology have removed numerous labor and energy-intensive steps. Similarly, improvements in the primary end of making steel are under investigation. Technologies of direct iron making may allow the direct use of high quality coal without the need for metallurgical coke. They may also provide lesser capital costs when compared to the coke oven/blast furnace route, and would have the advantage of the ability to offer the economy associated with small scale production. Such technologies may facilitate high flexibility when it comes to selection of raw materials.

BPO Mantra For Success In 2016: Training For Employees by Clients

Visit Unpakt and Compare The Price Of Moving Company

A 5-step Guide for Being a Successful Landlord