According to researchers from the University of Bristol, in 1898, electricity finally overtook steam as the most common source of energy. A century or so later, electric cars have finally started to become more mainstream and less of the stuff from a sci-fi geek’s dreams. With this year’s offerings, 2017 just might make a place for itself in the pages of 21st century automotive history.

While everyone from the most ‘eco-holic’ car enthusiasts to your grandma-in-law has probably heard the name Tesla thrown around these past couple of years, other companies including BMW and Ford have stepped up their electric vehicle offerings for 2017. The range of choices has widened, featuring everything from moderate priced vehicles to more expensive, greatly improved ranges. Depending on where you live, government incentives and the development of public charging stations are the icing on the cake for these types of initiatives.

Here are this year’s top five most promising electric cars that might mark the real beginning of a new era of green transportation:

BMW’s 2017 model of the i3 is the perfect car for the city commuter, and it’s fully electric for all you eco-holics out there. It’s a four-seater hatchback with 170 hp rear-wheel drive, and comes in Protonic Blue or Fluid Black and Mineral Grey. This iteration of the i3 boasts a 33 kWh lithium-ion battery pack, which can be fully charged with a standard 120-volt outlet in about 17 hours. That said, if you’re lucky enough to live near a DC fast-charging station, bring that time down to about 30 minutes.Top 5 Electric Cars to Look Forward to in 2017

According to BMW, you’ll get up to 190 km (New European Driving Cycle range) out of a single charge. For the average commuter, however, expect about 180 km. The range shouldn’t be a problem for most drivers, but the option is always there to level up with the optional Range Extender if you’re looking to do longer trips. This nifty little addition – a nine-litre gas tank – will set you back about $4,500, but don’t fret just yet. For all you lucky Ontarians out there, the i3 – which has an MSRP of $47,500 – qualifies for a $13,000 subsidy. This is because the gas tank doesn’t kick in until the battery runs dry, which means it still counts as a fully electric car! 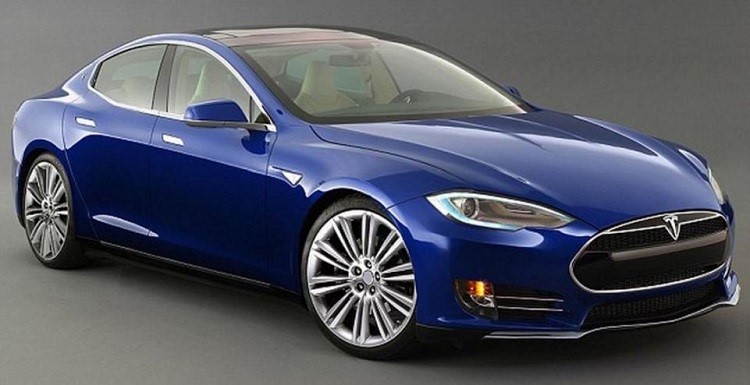 The hype around Tesla’s latest offering – the Model 3 luxury sedan – has made it the most recognizable brand offering electric cars. Though Tesla’s taken more than 300,000 pre-orders, production isn’t slated to begin until later this year, which means the car won’t be delivered until mid 2018 or later, depending on where you live. However, it’s still worth taking a look at if you’re inclined to making a purchase this year. At $35,000 USD, it’s a great value compared to the Tesla’s Model S. Local incentives might also bring that price down slightly, but the actual transaction price will certainly be slightly higher. Elon Musk tweeted that with additional options, the Model 3 will probably come out to about $42,000 USD for the average consumer.

The Model 3 brings driving into the future, beginning with its design. It features curved glass to give the illusion of roominess. Coupled with the fact that there is no engine whatsoever, this five-seater should feel quite spacious for a sedan. Beyond having no engine, most futuristic of all, the Model 3’s controls are entirely touchscreen-based.

In terms of speed, this electric car is reported to hit 100 km/h in under 6 seconds, and able to reach up to 345 km per charge. While there is home charging as an option, recently, Tesla changed their Supercharger program, which now offers Model S and Model X cars ordered after January 15, 2017 roughly 1,600 km worth of free Supercharging credits on an annual basis. If the credits are used up in less than a year, a Supercharging fee will apply, based on local regulations, with most drivers set to pay per kWh. Undoubtedly, a similar package will be offered to Model 3 drivers.

The new all-electric Chevrolet Bolt EV is General Motor’s game-changer, boasting one of the best ranges of any vehicle in this class. Classified as a small wagon, this five-seater front-wheel drive car will get you up to 383 km off a single charge. With a charge time of 9.5 hours using a standard 120-volt outlet, its lithium-ion battery boasts a capacity of 60 kWh, and will go from 0 to 96 km/h in under 7 seconds. For the impatient, the Bolt EV also offers DC fast charging so you can get up to 145 km in about 30 minutes from a public station. For anybody near a city, this means you’re pretty much golden.

The Bolt EV has a base price of $42,795 but you can expect that cost to be lower if you live in Ontario, British Columbia or Quebec, as these provinces offer up to $14,000 in incentives depending on where you live. This car has good legroom, and the dashboard feature a 10.2 inch screen that is modern without being distracting. You’ll get all the real-time information you need, including details on how much energy you’re using if that’s your jam.

Hyundai’s Ioniq model offers three different powertrain options to cover a range of users, which is a first for a car manufacturer. You’ve got your choice of the Electric, the Hybrid or the Plug-in Hybrid. This four-seat subcompact hatchback isn’t the roomiest of vehicles, but this size of car isn’t necessarily meant for transporting the kids’ soccer team anyway. While pricing hasn’t yet been announced for North America, in the UK it’s costs about £25,000 before incentives.

For the most diehard eco-holics out there, the US Environmental Protection Agency (EPA) has declared the Ioniq Electric option to be the most energy efficient car of the year thus far. Also take note that all three Ioniq options make use of recycled materials, such as powdered wood and volcanic stone, without making the car look like something out of the Flintstones. In fact, the IONIQ has actually received the prestigious Red Dot Design Award.

The Ioniq Electric offers a 28kWh lithium-ion polymer battery, which should give you roughly 170 km per charge. Expect the Ioniq Electric’s 120 hp motor to get you to about 100 km/h in under 10 seconds, and a top speed of roughly 165 km/h. You can charge the battery up to 80 percent in about 20 minutes using a Level 3 DC fast charger. As a bonus, Hyundai will also be offering a lifetime guarantee on the Electric and Plug-in Hybrid options, and is the only manufacturer to do so.

Back when the Ford Motor Company launched in 1903, even trains hadn’t yet overtaken the popularity of horses as a means of getting around. That feat, according to University of Bristol researchers, would take another year to be achieved. Shortly after, cars would revolutionize the world. Now, in 2017, Ford cars are making yet another foray into the future. The 2017 Ford Focus Electric Hatch, a 5 passenger front-wheel drive is the company’s mid-range electric vehicle offering.

Equipped with a 107kW electric motor, the Ford Focus Electric is said to get about 185 km per charge. The 33.5 kWh liquid-cooled lithium-ion battery can be charged in 5.5 hours with a 240-volt charger, or in 30 hours with a 120-volt charger. The 2017 model also now offers DC fast charging capabilities, which will charge up to 80% of the battery in 30 minutes.

In terms of eco-friendliness, the car boats seat trim made from recycled materials, and seat cushions made of soy-based bio-foam. With a starting price of $31,998 and up to $9,600 in rebates for Ontario consumers, this new Ford Focus model is certainly one of the most affordable options for all-electric vehicles, which just might make it a hit amongst drivers who want to keep their budgets – and the environment – in mind.