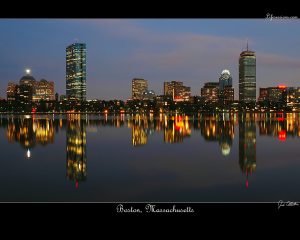 Boston, with a surface of 232 square kilometers and with a population of almost six million in the metropolitan area is the capital city and the biggest urban agglomeration in the state of Massachusetts. The city was founded in 1630, being one of the oldest and richest economic, financial and cultural centers of the northeast US, being called the Athens of US because of its European cultural influences.

Boston is the perfect city for walking, as it offers some really attractive places for tourists. 12 million of people visit Boston each year, from the United States but also from all the other parts of the world, being one of the most visited cities for cultural purposes.

The daily visiting program might include a visit to the oldest park in the United States, the Boston Common, and the dinner can be served in Chinatown. Just because the city is a European one does not mean that other cultures are not solid in the area, and Chinatown is the best proof for that.

Where to walk in Boston

The streets with the most important tourist attractions are Acorn Street and Beacon Street, the first one of them being conserved since the XIX century. It is one of the most popular and visited place in the city, and there, you will have the chance to visit some of the most beautiful buildings from the architectural point of view. Of course, the State House is the most important of them.

On this street, the most important Charles Bulfinch creations are present. He is the biggest designer of the Federal American style, being the architect of Somerset Club and Harrison Gray Otis House.

Boston attractions: what you must see

Amongst the most important museums around, we can count Isabella Stewart Gardner Museum, Museum of Fine Arts and Museum of Science.

Isabella Stewart Gardner Museum is a true Venetian palazzo, hosting some important painting collections, including some masterpieces, such as “The Kidnapping of Europe” by Titian, “Hercules” by Pietro Della Francesca, or “El Jaleo” by Sargent. The first floor is reserved to contemporary art collections.

Museum of Fine Arts is a museum with a large variety of art pieces: from the masters of Renaissance and Baroca to the Impressionism art, African masks and American ceramics, to the contemporary art. In this museum, one of the most important American painting collections can be found, with 60 masterpieces of John Singleton Copley, the most important Boston painter. The French impressionists are well represented with a collection of 38 paintings of varied and recognized painters such as Monet, Renoir and Manet.

The Museum of Science has over 500 operas, from areas such as astronomy, anthropology and history.

Besides museums, the Boston attractions are diverse, offering a large number of options to a large number of people. It will be liked especially by Europeans, which will feel just like home hare, especially because of the people that have strong influences and the education of the Old Continent.

James Feldkamp on the Development of International Counterterrorism Efforts

Why Should I Choose Australia for Study?