If you really want to set out to become a professional food photographer, it’s inevitable that you’re going to have to dedicate much of your life to the case. Like most other areas of photography, it’s not just a case of there being so much to learn, but at the same time so many skills to master and good habits to pick up along the way.

That being said however, it’s not to say that there’s no room for making serious improvement to your current food photography skills without necessarily having to go down the professional route. After all, it’s no secret that food photography has become something of a global passion, with tens of millions of people now routinely documenting their culinary creations and sharing them via the web. 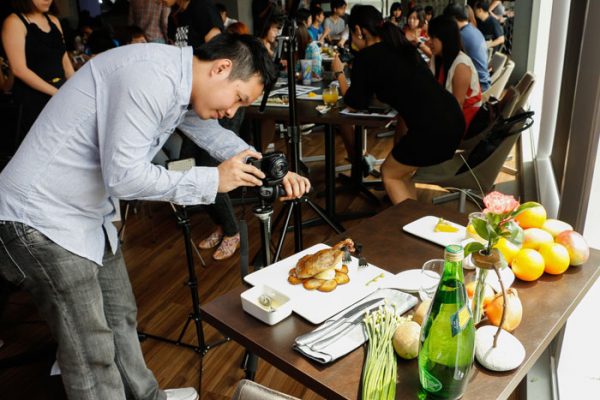 So if this is one movement you’ve been well and truly swept away by, here’s a look at five seriously valuable tips from the experts at www.howardshooter.com guaranteed to improve your output:

Not that it’s always the most plausible prospect in the UK, but when and where the weather allows you should give thought to going outdoors. The reason being that if you can find a spot that’s nice and bright yet out of direct sunlight, it will help you take infinitely better shots than would be possible indoors. One of the most difficult things to nail with food photography across the board is the lighting – get the lighting right and the rest is actually quite easy!

One of the most effective ways of making the main focus of your shot ‘pop’ in a big way is to experiment with depth of field. Mercifully, many of today’s higher-end digital cameras have made it so much easier than ever before to achieve that gorgeously dreamy blurred background effect – even if some purists might call this cheating. Particularly if you are shooting anything in multiple quantities – a tray of cupcakes for example – depth of field can be a supremely effective tool for producing outstanding results.

Ever wondered why there are always pages in cook books that show you either the dish being cooked or the ingredients rather than the finished dish itself? Well, that’s because in so many instances the dish once completed doesn’t look nearly as colourful and pretty as it did while it was a work in progress. Exactly what kind of dishes this may or may not apply to comes largely down to personal preference. However, if you have an array of multi-coloured ingredients in front of you and you know the final result is going to be a big bowl of brown goo, you might want to think about taking a few in-progress shots.

It’s natural to assume that any and all food shots must be taken of dishes that are cooked, being cooked or even in their raw form, but in all cases must be largely untouched. This isn’t the case at all – sometimes it can be far more effective to show something that’s already been started on by a hungry human! A crumbled cookie for example never fails to look incredible, as may a steak cut in half or a torn baguette with butter. The same also goes for a pint of ale that’s been half-quaffed and has those tell-tale white lines down the inside of the glass – supremely appealing!

One of the most enjoyable and potentially rewarding experiments to try out when it comes to taking food shots is limiting the frame to just a portion of the full subject. Sure, it’s a pretty epic tray of cupcakes you’ve made, but what if you got up close and took a shot that just showed where the frosting meets the cake? Or with the salad, maybe the jumbo shrimp on top will bring you a much better shot than a much wider shot of the whole dish itself. These are tricky to nail as they aren’t how you see the dish with the naked eye, but they’re so much fun to experiment with.

Last but not least, never forget that the way your dish is framed with the plate, the garnishes and everything else that makes it into the shot will make a very big difference. So along with going to town with the food itself, spare a good thought or two for the things you position around it in terms of how they complement the dish or otherwise.

Hemp Production Is On The Verge Of Get Legalized In Kentucky