Here’s the scoop on three of the best beaches in the world, all located in San Diego, California. You might be wondering why an article about beaches is coming out after Labor Day right?  While Labor Day typically ends the summer tourist season in San Diego, the locals know that September and October often bring not only warmer months, but fewer crowds.  No matter when you’re visiting San Diego, it is possible to enjoy the beach and even to enjoy a drink on the beach or at least next to it.

Recently in San Diego the city has enacted a ban on all alcohol on the beach, so we’ll suggest a place or two to have a drink after a long day enjoying the sun.  The goal of course is to help you have the best vacation possible, no matter when you’re visiting San Diego. 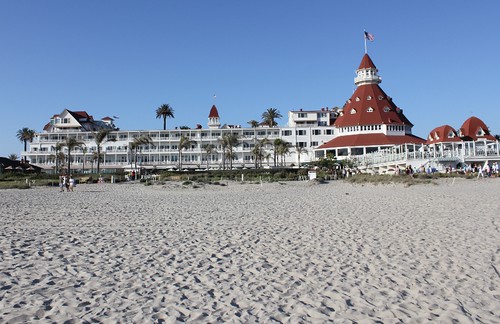 Coronado is an interesting place on a number of levels, partially because the island is basically cut into two halves, one part Navy (with 3 aircraft carrier’s based there at all times) and one part civilian.  It’s home to the Navy Seals and white sand beaches which make their training possible, but also make Coronado home to more movie scenes than any other in San Diego.

I enjoy visiting here because the island is both beautiful and easily accessible from downtown San Diego.  It’s also less busy with locals than other areas of San Diego, which is a huge help when inland temperatures rise well above 100 degrees over the summer.  For a perfect day, find street parking near the famous Hotel Del Coronado and set up on the huge white sand beach in front of the resort.

You’ll have easy access to restrooms and plenty of lunch choices both inside the hotel as well as, within a few block walk. You’ll enjoy the same beach that the resort touts when selling it’s $1M+ vacation rentals, of course at a fraction of the cost!  The waves are generally manageable here for kids 10 and older, although there is still plenty of open ocean beyond, so both patience and safety are important.

At the end of the day, have a glass of wine inside the Hotel Del at their ENO wine bar and pizzeria.  ENO features a different set of wine flights every night of the week, largely focused on new world favorites and Italian selections.  Unlike some other stuffy wine bars, they also offer a nice selection of dessert wines. 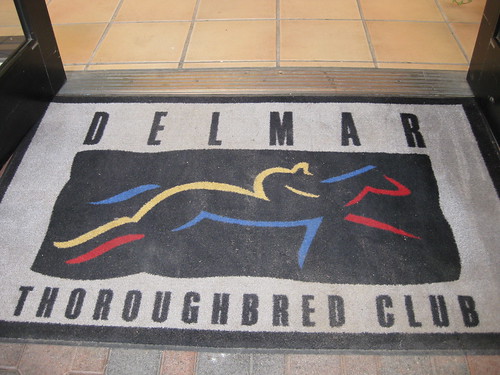 If you’ve ever bought a Rusty surfboard or tshirt, the original store is still here although you’re likely to be surprised by its size, it is about 400 square feet. Del Mar is a favorite spot for most San Diego residents because you can combine a morning at the beach, with an afternoon at the world famous race track.  Few places offer that setting within only a mile or two from each other and both are well worth your time.

The waves at Del Mar can be substantial, so make sure you are a good enough swimmer to take care of those around you.  As an additional point, the southern section of the beach is an off leash area for dogs, perfect if your four legged friend is coming with you on vacation, perhaps not as perfect if your toddler is afraid of dogs.

At the end of the day, have a glass of wine next door in Solano Beach at Carruth Cellars.  Carruth is an urban, working winery that is crafting truly world class wine right next to the beach.  The winery also does an incredible job at offering a range of events throughout the year, we especially love their end of the month movie night. 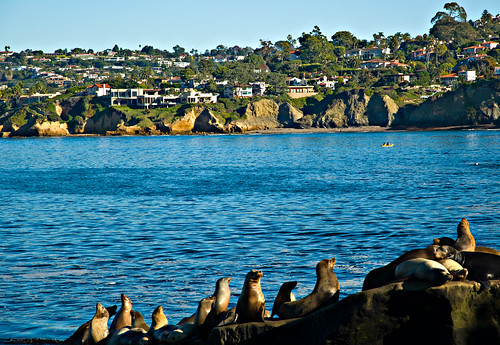 The best beach for kids, perhaps in America.  The cove offers a great combination of a tide free area, but also offers fish and other underwater sights to see.  If you’ve seen the movie Jaws, you’ll recognize the cove as the main area where the shark attacked tourists and yes, there are shark sightings at various points throughout the year.  Rest assured attacks simply don’t happen, partially because shark watching is one thing the lifeguards excel at.

Those same lifeguards are on duty year around, unlike most beaches in America. Evidently budget cuts haven’t quite hit this wealthy enclave as of yet. My wife and I love visiting La Jolla partially because of the diverse shopping and dining options in the area, all within walking distance of the beach.  In fact La Jolla was the first outing we went on when our son came home from the hospital.

I also decided to launch my wine business, during a long lunch at Jake’s Del Mar, which has recently closed.  La Jolla has become something of a destination for international tourists, so you’re as likely to hear Spanish, French or Italian at times during the summer as your are English.  The locals are proud of this beach and keep it as family friendly as possible, even setting up a summer concert series which typically draws huge crowds, especially when the Beach Boys play. There is also a group of Seals that take residence on a section of the beach during the cooler parts of the year, typically a treat for every little kid.

At the end of the day have a glass of wine or a beer at the Public House where 40+ beers reside on tap and the wine list shows off the central coast and even the best of Temecula, itself only an hour drive north.

Lastly, I hope this guide helps you plan your next beach vacation to Southern California.  San Diego really is a wonderful place to visit year around, even if the heaviest tourist season typically runs from Memorial Day to Labor Day.  The rest of the year offers an incredible amount of access, without as much to worry about in regard to traffic, parking and crowds.

Mark Aselstine is the owner of Uncorked Ventures, an online wine club focused on delivering the highest quality wine available.  Having grown up in inland San Diego, he spent an inordinate amount of his summer vacation trying to find the best parking spots at each of these three beaches.  While life has relocated him to the San Francisco Bay Area, he still misses a warm summer beach.

Planning a Holiday? This is What you Need to Keep in Mind

Reasons Why You Should Choose Travelling to Asia