With their mix of beauty and strength, Japanese homes fuse together new and old traditions, offering a simple style that this country’s people are known for. Roofs in particular are their own form of expression, blending contemporary visions with classic overtones. Some feature skylights, which are not as overpowering as ones you might see in America or elsewhere, and others feature roof-top gardens filled with rocks, flowers, and bonsai trees. Homes and roofs in particular within Japan are a study in contrasts. Whether modernist or traditional in approach, roofs bring in a cultural component that says a lot about the homeowner’s style and personality.

It is considered good form to incorporate odd pieces or imperfections into home design in Japan, according to Architectural Digest. Roofs in Japan are an extension of the home itself, with the style complementing the decor elements and sometimes acting in juxtaposition for effect. Many roofs in Japan hark back to times of old, where history meets function. Gassho-style farmhouses, found in the insulated regions of Shirakawa-go and Gokayama, showcase a simpler approach, with steep thatch roofs built to withstand the area’s weather and economical pressure up until World War II, says Architectural Digest. Now on the UNESCO World Heritage Sites list, these thatch roofs signal a bygone era but still have an influence on some modern Japanese roofs. 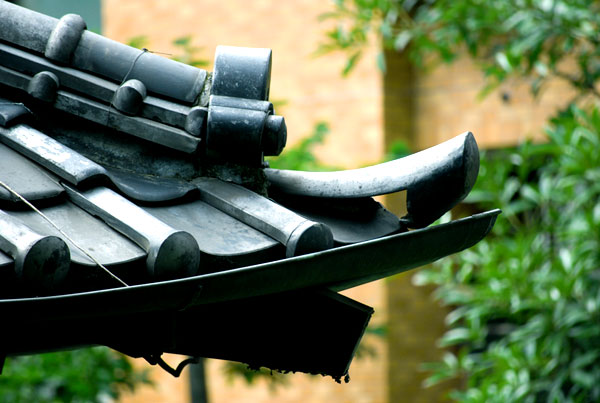 Today throughout Japan, you’ll find a mix of modern roofing, punctuated by sleek lines and sharp edges, and traditional roofing, with a throwback to the earlier designs popular with the Japanese. In fact, roofing styles vary with different areas of the country and even within the continent. For example, in East Asia, hip and gable roofs feature hip roofs that slope down on all sides, incorporating a gable on two opposite sides. Many traditional roofs sport the typical round glazed tiles showcasing decorative ends and ridge caps. Contemporary homes, boasting smooth shapes and lines, don’t use much ornamentation, just like their American counterparts. Other Japanese roofs are flat, with little to no decoration. While some homes feature many levels of roofing, with several nooks and crannies for effect, others are straightforward and flat, leaving little to the imagination. With costs of building materials high, traditional designs and historic renovations are often made with the same materials as newer homes in order to save money on overall costs. With the high cost of land, homes in Japan are often built on small lots, and span up to three stories.

There is a subset of radical architecture in Japan. Typically led by young architects fresh out of school, these residential designs defy the traditional in favor of avant garde housing in response to the country’s economical situation and individual creative pursuits, says ArchDaily, a publication that covers the latest architectural news around the world. From homes with no windows to wide-open concepts, this brand of extreme living quarters has captured the interest of architects, designers, and homeowners alike. The roofs on such eccentric Japanese homes cap off the overall style, with some flat, others domed, and still others crooked and oddly off-center. By the way, did you know Japan boasts the highest number of registered architects per capita?

Japan offers a landscape of highly diverse roofs, indicative of the individual styles not just of homeowners but of whole regions as well, blending history with the here-and-now.

Desmond Chaplin writes on roofing, home improvement, construction, home maintenance & repair, renovation and other such topics. Dallas residents looking to conduct a bit of roof repair or have a new roof installed should view the services from Quick Roofing, a trusted company in the area.

Keep Pests Out With Pest Control Techniques and Tools