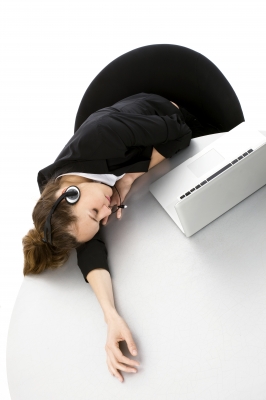 Sleep apnea is a sleep disorder that causes individuals to stop breathing for periods of 10 seconds or more, often hundreds of times per night. This interruption in breathing during sleep leads to insufficient levels of oxygen reaching the brain and other bodily systems, which creates problems ranging from headaches and nausea to hypertension, heart disease and stroke. And when a person can’t get a good night’s sleep, daytime is often experienced in a depressed slump because the person is overly tired and irritable.

Signs of sleep apnea include snoring and recurring daytime sleepiness. Often, people are unaware that they are experiencing symptoms of this condition, aside from a general lack of energy. For some occupations, sleepiness is a problem; for others, it can be catastrophic.

Who gets Sleep Apnea?

Anyone can get sleep apnea, but among the known risk factors of sleep apnea are these determinants of increased incidence:

Medical conditions that cause nasal congestion, including allergies, can also contribute to sleep apnea.

People in sedentary occupations seem to get sleep apnea more frequently than the general population. This means that the accountants, airplane pilots, writers, seamstresses and truck drivers are at a higher risk for this condition than their more physically active peers. Here’s some insight about why.

A study by the Toronto Rehabilitation Institute Sleep Research Laboratory indicates that when a person sits for long periods of time, fluid accumulates in the legs. At night, when these individuals lie horizontally, the fluid redistributes. The shifting of fluid causes airways to narrow and can lead to obstructive sleep apnea (OSA), which is the far more common of two types of this condition. The other is central sleep apnea which is usually associated with a heart-related condition

Because sleep apnea interrupts a person’s natural sleep cycles and results in insufficient circulation, people with this condition are often sleep deprived and less alert than their well-rested peers. For truck drivers, airplane pilots and other transportation professionals, the issue of sleep apnea becomes quite dangerous. After all, good decision-making abilities and cognition are pretty important when driving an 8,000-pound vehicle on a crowded interstate or flying a 12,000-pound airplane that’s filled with passengers.

What are Solutions for Managing Sleep Apnea?

To minimize sleep apnea episodes, doctors recommend achieving and maintaining a healthy weight, sleeping on the side instead of the back, and quitting smoking. These are the DIY remedies.

Another solution is keeping a sleep diary. For truckers, the implementation of electronic on-board recorders (EOBRs) can help with record-keeping. This real-time fleet tracking system ensures that drivers are resting and working according to safety requirements. Using an EOBR allows drivers to document their breaks and monitor their driving time, providing valuable triggers for them to get some sleep and take mandated periods away from the driver’s seat.

The most common and effective devices for managing sleep apnea is the Continuous Positive Airway Pressure (CPAP) machine. This portable machine opens up blocked airways during sleep, allowing patients to sleep better. Results of using the CPAP machine are outstanding. Among truckers, studies show a 30 percent reduction in their crash risk after they have used a CPAP machine for a year.

How Should I Deal With TMJ Syndrome?

Ways to deal with tooth Sensitivity